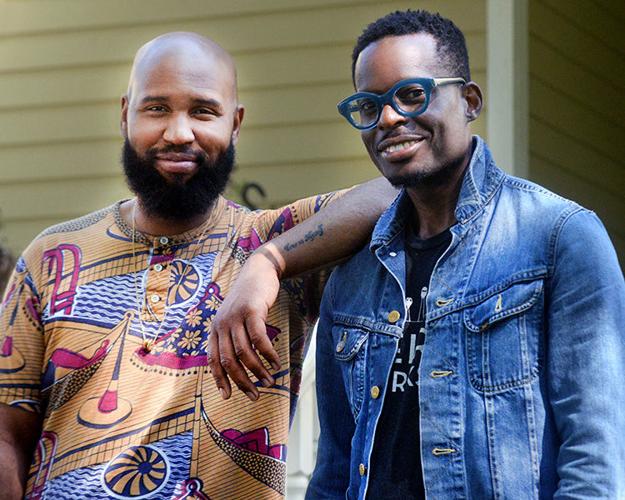 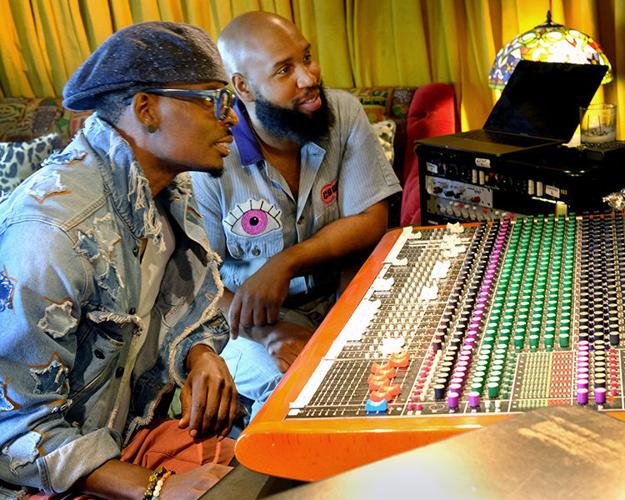 Louis York may sound like the name of one person, but is a fusion of East St. Louis and New York – of singer and songwriter, producer and instrumentalist, where Motown meets small town. They are a colorful duo with Grammy Award nominations and credits for songs recorded by some of the biggest names in pop music.

Chuck Harmony is the East St. Louis native who took to music starting at the age of four, playing the drums, trombone, piano and singing in the church choir. Claude Kelley was raised in the heart of New York City, taught under music programs since the age of two, trained on classical piano and graduated from Berklee College of Music.

They are jovial and expressive. Donned in red plaid plants, yellow shoes, blue-rimmed glasses, they roll off stories of a lifetime of music like second nature. They are award-winning and innovative and moving to new heights.

After working in the entertainment hubs of New York and LA, the guys met in 2007 in Atlanta while working for Def Jam Recordings. Several years later, they realized a similar desire for a new direction; they were two creative souls looking for their own path. Each realized the other was ready to quit and convinced the other to keep going. So, they took off for Nashville for what has become the “second chapter” of their career. A drive south had them landing rather serendipitously in Franklin, stopping for directions one day, and finding a home in the next in the very spot they got lost.

What they found was a strong sense of community and connection. They set up a studio in an old, modest Victorian in Downtown Franklin, where the house blends into the landscape, but when stepping through the front door and down a hall lined with platinum album awards and offbeat artwork, the mood builds to mysterious and eclectic, yet warm and inviting.

“We’re beyond happy here, it’s piece of mind,” Claude states. “The people are supportive and it’s so community based. We realized we already knew people here.” Chuck adds, “LA didn’t have the kind of synergy you have here; you won’t find it in any corner of LA. It’s really a blessing to find it here.”

A lighted Christmas tree in the living room offers their team a year-round sense of magic and escape. In the dining room converted to a conference room, a vision board stretches across an entire wall with pictures driving their inspiration. Upstairs sits a room draped in yellow and purple, where vocals are recorded and the pianos sing just the same. One, circa 1927,they call “Ray” and another called “Elton” along with an organ named ”Organ Freeman.”

“The house is a hub for creativity, it’s our blood, sweat and tears. It’s a mix of our lifestyle from all over, a mixture of weird,” said Kelley.

“Weird” being their beacon for business. They created Weirdo Workshop as a music collective, an independent label that gives them the outlet for greater creative freedom, to be inspired and inspire others. When it came to working in other markets, Kelley says, “You have to always have on your ‘cool.’ Here you can take off your ‘cool,’ take off the pressure and be real, find yourself.”

Louis York became the first act on the list, as well as an all-female vocal group The Shindellas, a mix of R&B, pop, jazz and dance.Their latest single, “Slow Motion,” is currently on the US Adult Contemporary Radio Chart.

Claude says, “Our music has gotten so much better since being here, it’s bold and masterful. We believe in melody and lyrics, and production and excellence. We’ve spent a lot of time in studios, now we have this potency of a smaller studio. We’re happier and freer.”

Looking to the future, Chuck explains, “We’re multi-faceted as it relates to entertainment. We want to be scoring movies, producing content as far as TV and movie. We want to focus on greatness, stay boutique in that regard, but we love to hunt for talent. If we find somebody that adds to the landscape, we definitely wouldn’t pass that by.”

Louis York and The Shindellas bring their latest music production to the Franklin Theatre on November 15th. Kelley explains, “It’s high energy, high fashion, it’s costumes and dancing, it’s groove-driven with a message. And, we make room for tender moments. You’d be surprised how many people come up to us crying, it affected them. We take pride in the production value, and to have it at the Franklin Theatre, we couldn’t be more excited.”

Their mission is to enrich humanity by servicing premium entertainment and well-crafted experiences. Sounds like a match for our town of Franklin and its crown jewel.

For more information visit, weirdoworkshop.com and for tickets to their November 15th show, visit, franklintheatre.com.