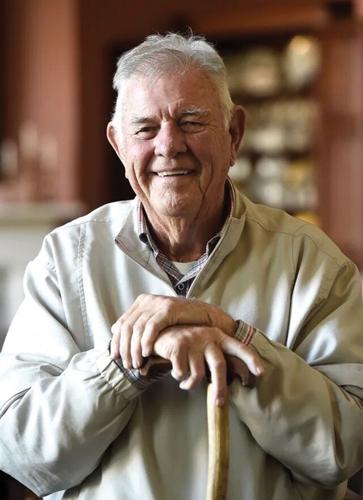 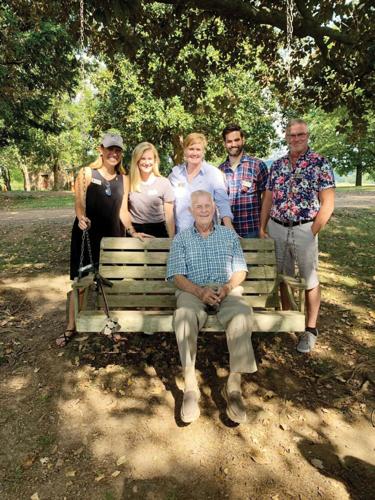 In July, the Franklin Board of Mayor and Aldermen discussed the $85,000 project at a work session.

“Gentry’s influence and impact has been poured into generations of locals — for some, that was in a classroom; for others, on a football field; and for many, on the bucolic grounds of the beloved Gentry Farm,” a press release for the project reads. “Throughout the last two decades, he would share the stories of his life as depicted in his book ‘An American Life’ and became a gifted storyteller to captivated audiences from one to hundreds.”

One of Gentry’s most widely known stories is of his time spent in the mid-1940s waiting on the rock wall for a bus to arrive, a bus that would deliver him and other young men across the world to fight and often die for their country in World War II. Luckily, Gentry returned to Franklin after the war was fought, but many of his brothers in arms were not so fortunate.

Inspired by this story and Gentry’s well-led life, Franklin Vice Mayor Brandy Blanton proposed the idea for a statue made in Gentry’s likeness to her friend, Carrie Drury. Soon after, Drury was selected for the Leadership Franklin Class of 2020 and placed in a project group alongside Ondrea Johnson (director of Williamson County Animal Center), Lance Jordan (executive director of Waves, Inc.), Michael Damico (owner of Damico Frame and Art Gallery) and Stacey Downs (owner of Cobra LLC).

Gentry’s family gave the project group permission to create a statue in his likeness, honoring the man himself and other young men who sat along the rock wall waiting to make the ultimate sacrifice.

“We had already talked about doing the statue, but after hearing [Gentry speak at History Day to Leadership Franklin], I was really fully bought into the fact that there needs to be a commemoration here in Franklin for not just Coach Gentry, because I do think his family is a big part of Franklin, but that whole generation of young men who sat … on the wall,” Johnson said. “We are not just a Civil War town. We have a lot of history here.”

According to Drury, $20,000 of the $85,000 cost of the project has already been unofficially pledged, and Franklin Tomorrow will accept tax-deductible donations after the project receives the board of mayor and aldermen’s approval at its August meeting.

Clarksville resident Scott Wise is slated to sculpt the statue. He graduated from Johnson Atelier in Mercerville, New Jersey; Austin Peay State University in Clarksville; and The Blackheath School of Art in London, England. He is a firefighter and has sculptures in private locations across the United States and the world.

The current design sees Gentry’s figure in bronze, sitting on a bench near the titular rock wall with a plaque that reads, “This statue in the likeness of Franklin, Tenn. native and World War II U.S. Army veteran Jimmy Gentry (1925-2022) as he reflects on the rock wall and the memories of waiting there for the bus that would take him and many others off to war to fight for our country — many of whom would never return.”

“We know that number one, [Gentry] deserves it,” Blanton said. “His family continues to say, ‘we want to make sure that people know that dad wasn’t the only soldier that left from Franklin.’ We understand that, but Jimmy Gentry is an icon in this community for far different reasons as well.

“He taught people how to be good humans way beyond the football field. The legacy he left will carry on through many thousands of people and the impression he made on their lives.”

“The statue will mean so much to so many of us who had the good fortune to really know him, but I am most excited that the statue will provide newcomers and visitors of Franklin the opportunity to know who he was,” Drury said. “To me, Coach Gentry will always be home, the idea of having a statue of him sitting on a bench in front of the rock fence in downtown Franklin will always be a reminder of what is good here. He touched so many lives, and to have him memorialized in this way seems the least we can do for such an incredible man who gave so much to our community.”

The statue is planned to be unveiled in spring 2023.