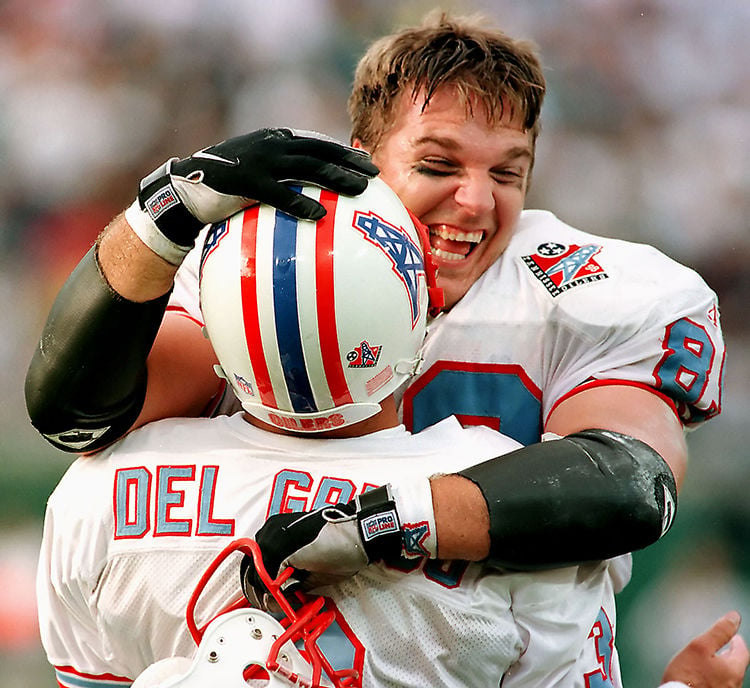 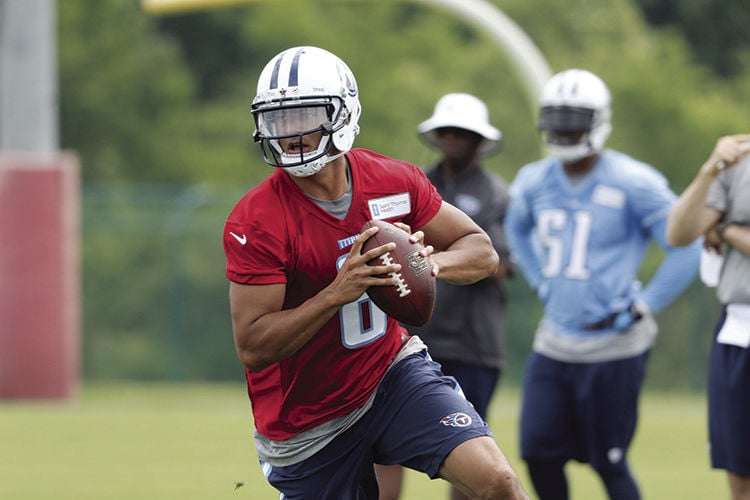 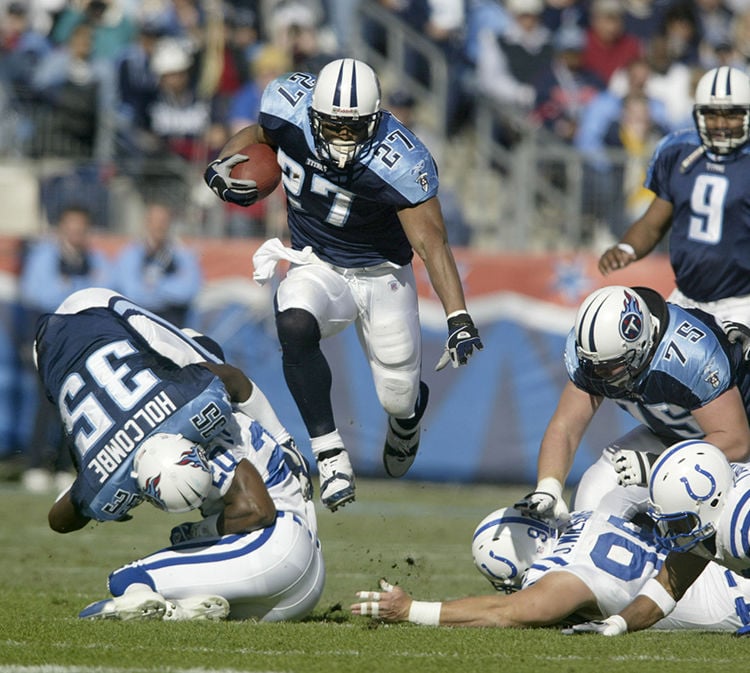 As I traveled the roads of Tennessee for my 20th off-season as an employee of the state’s NFL team, I couldn’t help but reflect on the first time I did the same, back in the summer of 1998.

Tennessee Oilers Radio Network executive producer Larry Stone and I hit highways, state roads and even some paths where our car traveled on simple gravel or dirt, as we looked for radio stations that would air our games. 1998 wasn’t pre-internet, but it was in the early stages, so we relied mostly on our sense of sight rather than Google to find these stations.

We would see a radio tower and then we would go call on the radio station. We were traveling salesmen, peddling a football future that we both considered bright, but most others hadn’t much considered.

Our lines were simplistic because both of us were “college football guys”, but they were the reasons that we were excited to be working for the Tennessee Oilers Radio Network.

“It’s the NFL – that’s the Steelers, the Packers, the Cowboys, the Super Bowl, John Madden, etc. Tennessee will now be part of all of that!”

“We have Steve McNair and Eddie George, two of the brightest young stars in the game!”

“We will be changing the name to something that belongs to Tennessee – and getting new uniforms and a new logo!”

“The new stadium in Nashville will be awesome!”

“Jeff Fisher is a great young coach. Floyd Reese is an outstanding general manager. And we have a team that is going to be really good once all of the pieces are in place!”

But after a disappointing 8-8 season in 1998 when Vanderbilt Stadium was rarely full and people got very little of the true NFL experience, Larry and I experienced a different off-season in the spring and summer of 1999. People were downright skeptical.

The new nickname, “Titans”, was well-received overall, as were the new uniforms and fireball logo. First-round pick, Jevon Kearse, was an SEC guy from Florida, so the fans liked that.

The positive comments stopped there.

It was time for McNair to produce at quarterback.

There weren’t enough University of Tennessee players on the team.

The new stadium had BETTER BE an upgrade over Vanderbilt.

There were too many opposing fans at the games.

The list didn’t end there, but you get the idea. We had a long, long way to go.

In late August, 1999, our staff was moving out of the trailers which served as our temporary offices, when some of our staff sat together for a rare time. Our boss, Don MacLachlan, casually discussed three basic goals for the 1999 season …

Those three things would solve all of our immediate problems. At that moment in late August ’99, all seemed attainable, and Don’s belief helped us to believe, too.

You know the rest.

Steve McNair turned out to be a great quarterback.

Eddie George was the Titans’ heart and soul and became the franchise’s all-time leading rusher.

Jevon Kearse led a defense which became one of the NFL’s most dominant, and eventually included a Tennessee Volunteer, Albert Haynesworth, as one of its best players.

In 1999, the Tennessee Titans sold out every game, made the playoffs, hosted the Buffalo Bills in what turned out to be the “Music City Miracle” game, made an incredible playoff run and went to Super Bowl XIV. The fans responded wildly.

A crowd of 10,000 people got inside Nashville International Airport after a playoff win in Indianapolis. And 40,000 sat in the cold and waited for the AFC Champions to return from Jacksonville. More than 60,000 lined the streets of downtown for a post-Super Bowl parade.

The NFL party in Tennessee continued into the new millennium.

From 1999-2003, the Titans won 61 games, went to the playoffs four times, had the best record in football in 2000, went to two AFC Championship games and sold out every single game.

And then, after rebuilding the team following a salary-cap purge, the Titans went back to the playoffs in 2007-08, with the 2008 team starting a franchise-best 10-0 and finishing as AFC South champions.

The best part? When Titans fans talked about the team, they referred to them in the familiar Tennessee “We”. When a fan in this state refers to their team as “We”, they have bought in for certain. It is the ultimate compliment.

In those days, Larry Stone and I didn’t have nearly as much selling to do. People knew the Tennessee Titans and understood the passionate following that had developed in a decade of the NFL in Nashville. Titans Radio became the NFL’s largest radio network.

Larry and I were both pleased with the progress, but often wondered what would happen if the team fell off.

Unfortunately, over the next few years, we got our answer.

From 2009-2015, Titans fans experienced a long, cold football winter. Many of our favorite faces departed and the replacements did not meet their standards. Changes became almost as commonplace as wins, as the Titans seemed to be frequently searching for a new answer. The team’s one constant – the best homefield advantage in the NFL – disappeared with defeat after defeat.

And when I talked with fans about the team, the Titans were referred to as “We” much less often. That hurt, but I understood.

Explaining those years on off-season journeys around Tennessee was not an easy thing to do, especially since Larry Stone departed to found highly-successful Stonecom Radio in Cookeville. It was just me and I didn’t have a lot of answers.

Until I saw Marcus Mariota.

The Tennessee Titans were going nowhere without a quarterback and the team’s turnaround began in 2015 when the Heisman Trophy winner from Oregon was selected with the #2 overall pick. A special player and a special person, Mariota was the perfect guy to lead the Titans back into contention. We knew it right away, even as Mariota endured a tough rookie season.

Another important pick-up just days before the 2015 draft: Amy Adams Strunk as the franchise’s new controlling owner. Showing the “lets-get-it-done-now” personality of her late father, Titans founder Bud Adams, but also understanding the realities of owning a football team in 2015, Amy Adams Strunk made changes where they needed to be made, left things alone that were working and pumped major resources into the entire organization. By early 2016, she started to make herself known to Titans fans, who immediately responded to her passion and her connection.

Things felt good entering the 2016 season and fans sensed it. They still wanted to see it before they believed it. They had not quit even though things had been tough. They simply needed to see the Titans to do something on the field to light the spark.

A four-game home win streak to end the year at Nissan Stadium.

A quarterback who was playing well, but only seemed to be scratching the surface of his abilities.

2016 will always be a favorite season of mine because of what it meant to Tennessee Titans fans. They got to enjoy NFL football in Nashville once again and showed the rest of the NFL that, when the Titans are rolling, there is no place like Nissan Stadium. In short, the year was fun. Finally fun.

So this off-season, as I have driven to spots near and far, early in the morning and late at night, the memories come flooding back of searching for radio towers in 1998 and trying to convince people that the new Tennessee Titans would be a big deal in 1999. The main difference this off-season is what people say to me…

“We have the best young quarterback in the game!”

“Nobody has two better running backs than we do!”

“With all of the new pickups in the secondary, our defense is going to be awesome!”

“Mike Mularkey is a really good coach. Jon Robinson is a great GM. We have plenty of (salary) cap room. We will be a playoff team for years to come!”

I smile when I hear it all, because 20 years provides prospective. I believe all of the same things and think that 2017 could be a special year for the Tennessee Titans. The NFL is so competitive, one never knows for sure, but the Titans have more players than they have in a long, long time. There is reason for enthusiasm, no doubt.

But what excites me most?

Mike Keith has been the “Voice of the Titans” for 20 seasons. He has worked with the franchise’s radio broadcasts dating back to 1996.