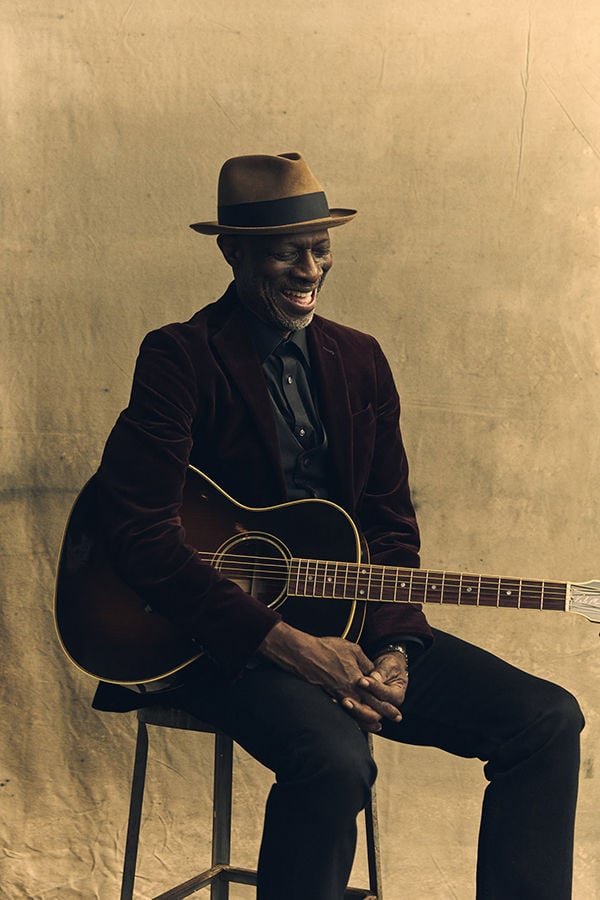 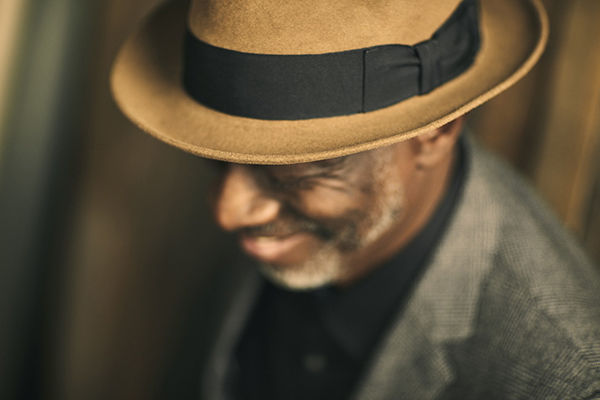 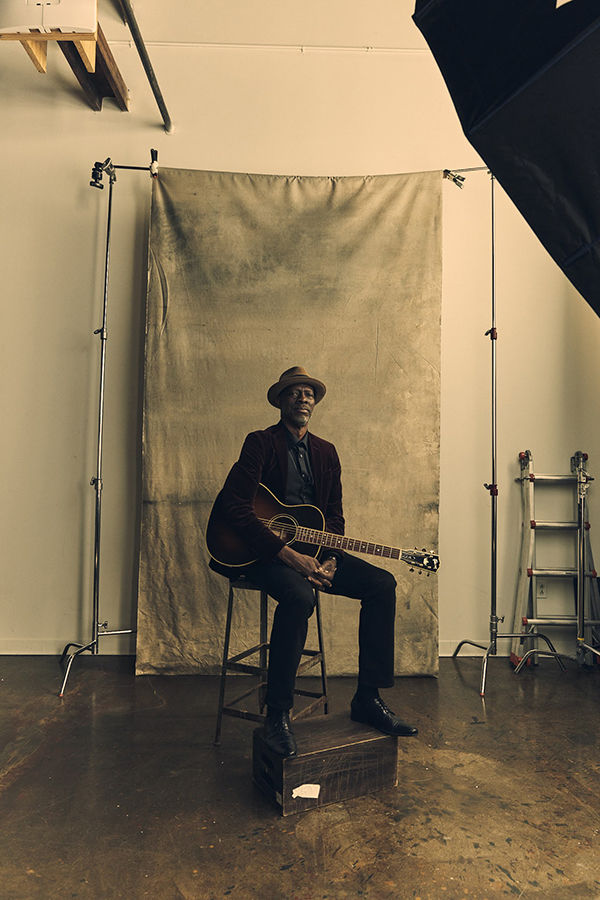 Keb’ Mo’ is in the middle of mixing his latest recording at his home studio in Franklin, Tennessee. It’s a beautiful spring day and he’s relaxing between sessions before he heads out of town for a much needed spring break respite with his wife, Robbie Brooks Moore, and 11-year-old son, Carter.

His most recent project is so new he’s not sure what he’ll title it, though his consciousness flows throughout the project.

“There are so many talented people out here, when it comes time to make a record, you’re just ready,” he says in his rich, familiar baritone. “One of the good things about Nashville is everybody here wants to write. I didn’t have to write any particular song for this release, but realized there was enough [in the bank] to make an album.”

Keb’ Mo’ called on long-time collaborator Taj Mahal to accompany him on this project, as well as legendary pedal steel player, Robert Randolph.

“I had a couple of things in mind when recording this album, but it’s like life…it’s a flow,” he says warmly.

Keb’ tackles, or at least addresses some pretty heavy topics on this project, which evokes current headlines such as immigration, Oklahoma, plastic pollution and even an argument between a couple.

There’s no doubt these have affected the soulful singer.

“I guess you would consider this another blues album, but the biggest blues we have now is the day-to-day,” he says. “We have this wonderful planet that floats around in space. It’s paradise and we keep taking more than we give back. This is the age of fossil fuels and you can’t slow it down. What’s the alternative? Giving up all of your pretty toys and clever things? We have to rethink things.”

Keb’ doesn’t hit you in the face with these topics, which can be controversial, but rather throws out hints hoping to evoke thought through his music.

“I know I don’t have the stature as an artist to make that much of a difference,” he says with steadfast inflection. “Let’s say a million people hear a song…that’s still just a drop in the bucket.”

“I don’t take myself too seriously, but I do take my work seriously,” he adds. “Money is a system of exchange, but the real resource is each other. We use it to pay each other and hopefully to help each other.”

It all took off for Kevin Roosevelt Moore (Keb’ Mo’) in 1994 with the self-titled release under his newly coined “Keb’ Mo’” moniker, and over the years, he has proven that he is a musical force.

His most unmistakable and recognizable feature is undeniably his voice. The deeply rich, soulful baritone that resonates from Keb’ Mo’ has kept him busy in the blues music world for decades.

There’s something else that reverberates through all of Keb’s songs and it’s not just those iconic, deep vocals. There’s an authentically timeless, folk sweetness that is somehow threaded through all of his projects, lending itself to a purity that doesn’t pigeonhole in any one genre. Americana falls short...folk and country blues are too generic. Keb’ is veritably soulful and genuine in his musical delivery on every project he touches.

Album after album, 14 in total, garnered him four GRAMMY awards and a producer/engineer/artist GRAMMY Certificate for his track on the 2001 Country Album of the Year, “Hank Williams Tribute – Timeless”.

He has received 11 GRAMMY nominations, in total, including Country Song of the Year for “I Hope,” co-written with The Dixie Chicks, and three alone for his 2014 self-produced release, BLUES Americana including Americana Album of the Year.

Keb’ has also been awarded 11 Blues Foundation Awards and six BMI Awards for his work in TV and film.

Keb’ Mo’ has also been a long-time supporter of the Playing for Change Foundation, a nonprofit organization that creates positive change through music education. PFCF provides free music education to children in countries, including Brazil, Bangladesh, Ghana, Mali, Nepal, Rwanda, South Africa and the United States, and has established 12 music schools around the world.

The organization also works with partners to address basic needs in the communities where they teach, including providing education, clean water, food, medicines, clothing, books and school supplies.

Additionally, Keb’ is a celebrity mentor with the Kennedy Center’s Turnaround Arts program which focuses on elementary and middle schools throughout the U.S.

Under the guidance of Michelle Obama and the President’s Committee for the Arts and Humanities, each artist adopts an under-performing school and becomes a mentor, working with teachers, students, parents and the community to help build a successful arts education program.

Keb’ enjoys his mentorship at The Johnson School of Excellence in Chicago, Illinois.

“I’ve got a great relationship with Concord Records based on mutual respect,” he says about the record label.

“I’m really proud of this record,” Keb’ tells Concord Records, “and I really owe Taj for hanging in there with me.  I feel like this is kind of a legacy project, and we’re both pulling from something way back in time.  Taj is a part of the same chain that I’ve always been pulling on.  He’s like a guide through all that stuff, back through the Deep South and the church and the Caribbean and all the way back to Africa.  He has some real musical knowledge that goes back to the origins.”

He tapped into some of Mahal’s knowledge on his latest project, and also brought the aforementioned world events to the table.

When asked if those lofty topics conjure any impending doom when raising his son, he quips with a deep chuckle, “I worry about nothing. I think that every generation is born with the tools inheritably and instinctually to deal with what’s going on around them. I try to keep that attitude and hopefully that shows him a way to be and to love.”

He expects the not-yet-named album will release sometime in late July or August and will be keeping himself busy before then.

This year Keb’ Mo’ celebrates his 25th anniversary year as a solo artist with an upcoming tour and new studio album. The international solo tour will include a first-time performance at The Dubai Jazz Festival and trips to Australia, Europe and dates spanning the United States.

He will play the Franklin Theatre June 7 and 8.

For a man of 67, Keb’ Mo’ has retained a youthful look with slight smile wrinkles around his clear eyes, but he does enjoy his days off.

“I have to admit, when I’m not working, I just lay low,” he laughs. “When I’m not playing out, I just live and work here at the house.”

Keb’ says he’s looking forward to the shows in Franklin, which he and his wife made their home in 2008 after many years living in Los Angeles.

“My wife decided she didn’t want to live in L.A. anymore, so we started looking at places,” he says. “She liked Nashville and had some connections here, so she talked me into it.”

“I wasn’t sure about it at first, but once we moved here, I found that it was great and I’ve got plenty of room to work in,” he says referencing his 2,500-square-foot Kind of Blue studio in Franklin.

“This place has become home,” he said.

Go to kebmo.com/tour for the most up to date schedule and tour information.

Will Jordan is a Franklin native and the owner of Kimbro’s Pickin’ Parlor, a music venue and restaurant in downtown Franklin. He also owns Carpe Diem, located directly next door which offers professional photography session bookings, eclectic vendors and the largest selection of vinyl in Williamson County.