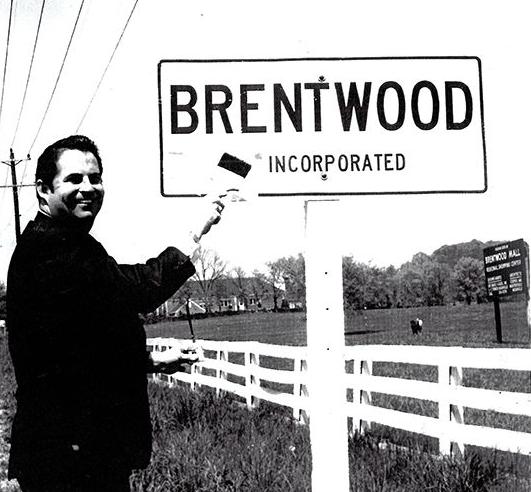 Brentwood Chamber President Chick Boggan paints out the "un" to transform Brentwood from an unincorporated area to a city in 1969. 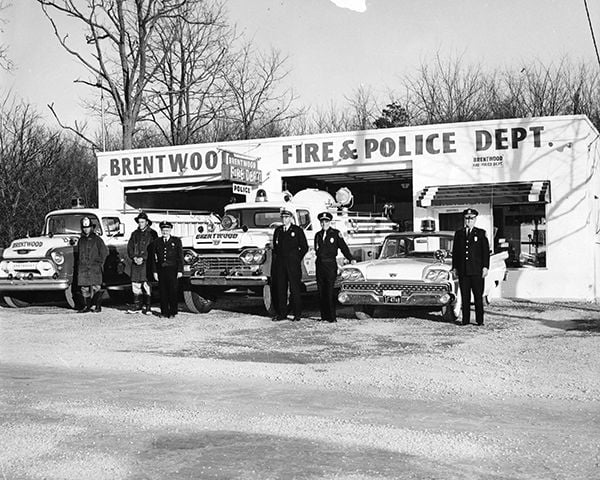 Brentwood Fire and Police Department, circa 1960 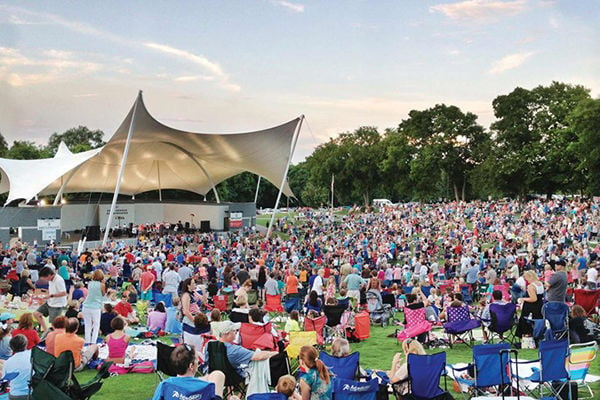 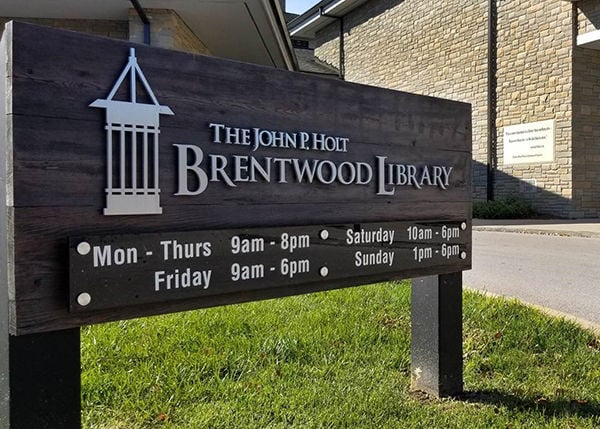 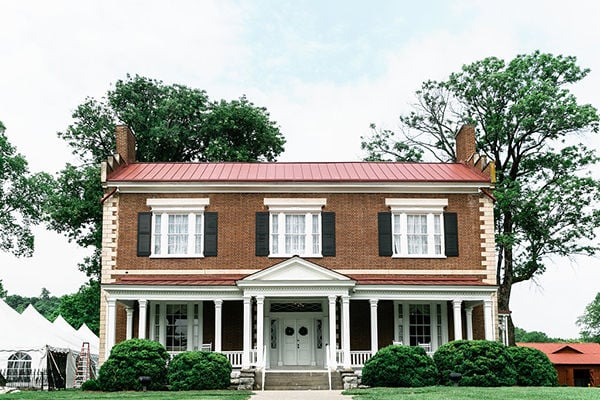 Brentwood Chamber President Chick Boggan paints out the "un" to transform Brentwood from an unincorporated area to a city in 1969.

Brentwood Fire and Police Department, circa 1960

Prior to the 1960s the area now known as Brentwood was primarily farmland. When I-65 was constructed through the area, farmlands began transforming into residential neighborhoods and the community started to grow. Large lots and the appeal of living in a country setting brought an interest in the area.

On April 15, 1969, Brentwood incorporated as a city and this year celebrates its 50th birthday.

Emery Pewitt was elected at the city’s first mayor; Bob Robinson, vice-mayor and John Sloan Jr. as city commissioner. Their dedication to controlled land use, pride in community and planned growth set the foundation for the city today.

City leadership with an engaged citizens’ group created many of the parks and amenities residents enjoy still today.

Recently Williamson County named the indoor soccer facility to honor Joe Reagan. Joe and his wife Betty both served as city commissioners, and Reagan had a lasting impact on youth sports in Brentwood. From the children’s playground at Crockett Park to the fields of Civitan, his dedication to the city can still be seen today.

Rick Warwick, Williamson County Historian shares, “Vance Little and Mary Sneed Jones were active in the formation of the town. Both were voices for preservation. They were advocates of the Brentwood Historical Commission.”

Much of Little’s work has been preserved at the Brentwood Room at the John P. Holt Library. The community can visit the room to view memorabilia, read his books and learn more about the history of the city.

Brentwood has received many honors over the years, including Most Business-Friendly City, Tree City USA awards, multiple recognitions for police and fire as city employees and for volunteers seeking a level of excellence in serving.

Over the past 50 years, a city known for its rolling hills, beautiful neighborhoods, parks and green space has seen substantial growth in the business community.

For those who lived here when the city was incorporated, and for all those who have moved to Brentwood for jobs and outstanding schools, 2019 will be a year of celebration: The past, the present and the future.

The past offers citizens Ravenswood Mansion, often referred to as the “Jewel of the City,” located in Marcella Vivrette Smith Park; the Crockett House located within Crockett Park is visible to all who visit the park.

In 2003 Primm Park opened to showcase Boiling Springs Academy and the Native American mound settlement where today elementary school children, and the community can look inside an 1800s school house. The city has many other historic landmarks throughout.

Sharing in Brentwood’s past and present are Brentwood Academy and the Hill Center, both of which turn 50 this year, too.

City Park and the expansion of the Hill Center have brought multiple new businesses and restaurants for residents to enjoy.

Celebrations for the city’s 50th Birthday began in January with a sponsor celebration, thanking companies and individuals who have joined to support the yearlong festivities.

The city commissioners appointed a group of volunteers to plan the events. Vicki Sanford, steering committee chair shares, “While the task of planning events for the city has been great, it’s been fun to watch the community become excited about celebrating the city’s 50th Birthday! We hope everyone will enjoy the parade and BrentFest.”

On Saturday, April 13 at 2 p.m., A Golden Gallop Parade will be held in Maryland Farms to kick off the festivities. The community is encouraged to participate and invited to attend this fun-filled afternoon. Both Brentwood and Ravenwood High School bands will be performing, along with many other community and civic organizations.

Parade Director Lynn Stallcup hopes the community will line the parade route in support of the event. “Since the name is ‘A Golden Gallop,’ we had to have a lot of horses. As of now 29 equestrian groups have signed up to participate,” she said.

“Several of the sponsors are providing floats and cars.  Everyone is enthusiastic,” Stallcup said.

“We have a large group of Tractor Supply team members who own Golden Retrievers and plan to walk them in the parade beside our float. Pets and animals have always been near and dear to our heart and our customers’ hearts; in fact, the pet and animal division has grown to be the largest part of Tractor Supply’s business,” shares Mackenzie Goldman public relations specialist for Tractor Supply Company.

BrentFest, a community music festival, will be held on Saturday, June 15 at 3 p.m.at Crockett Park. The family-friendly event will feature several bands, a beer garden, food trucks, and activities for children.

Rhizome Productions has been hired to help organize the event.

Featured bands include Tim Akers and the Smoking Section, Rock and Roll Pianos along with other local artists. Other bands are to be announced closer to time.

The final event of the year is Rendezvous at Ravenswood Mansion on Thursday, Oct. 10 at 6:30 p.m. Sponsors of the yearlong celebration, along with community residents will enjoy a fun evening of dining and dancing to the band Super T Review.

What does the future hold for the City of Brentwood? In May citizens will cast their vote for four open seats on the city commission. Continued leadership will focus on maintaining a community of excellence recognized in all areas.

Brentwood Mayor Jill Burgin said, “Brentwood is a unique community in that it is primarily residential but is supported by thriving, loyal businesses that understand the value of its location and its government’s standards. It’s been my pleasure to help guide the operations of this city in the face of its incredible growth and that of neighboring cities.”

To learn more about the events, visit www.brentwoodTN50.com