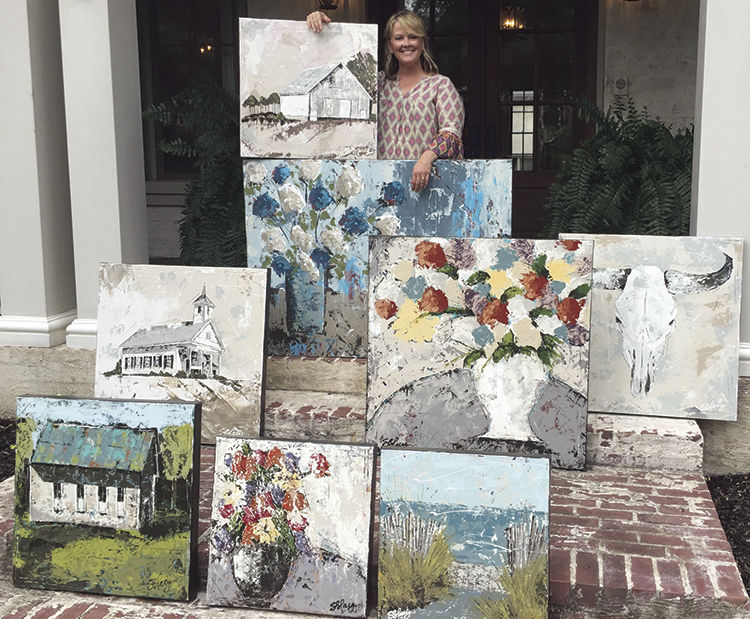 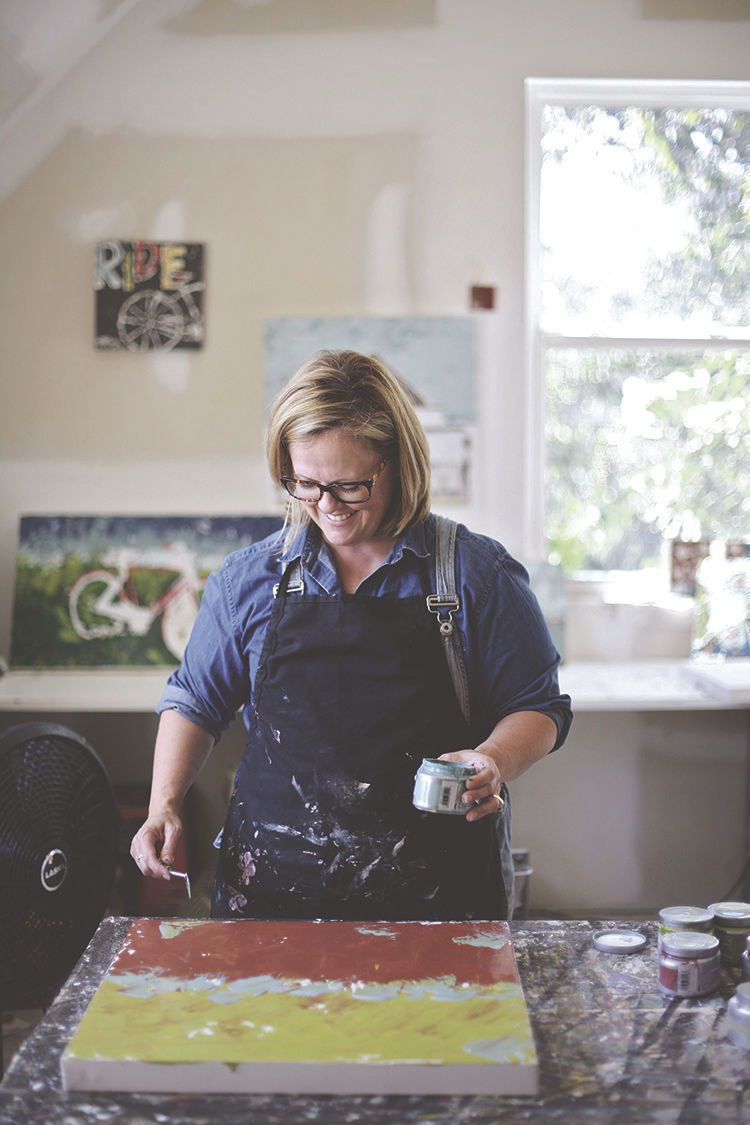 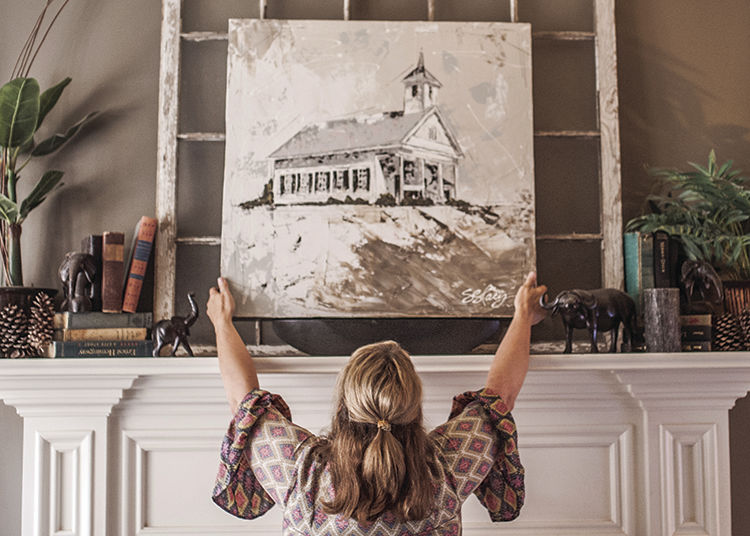 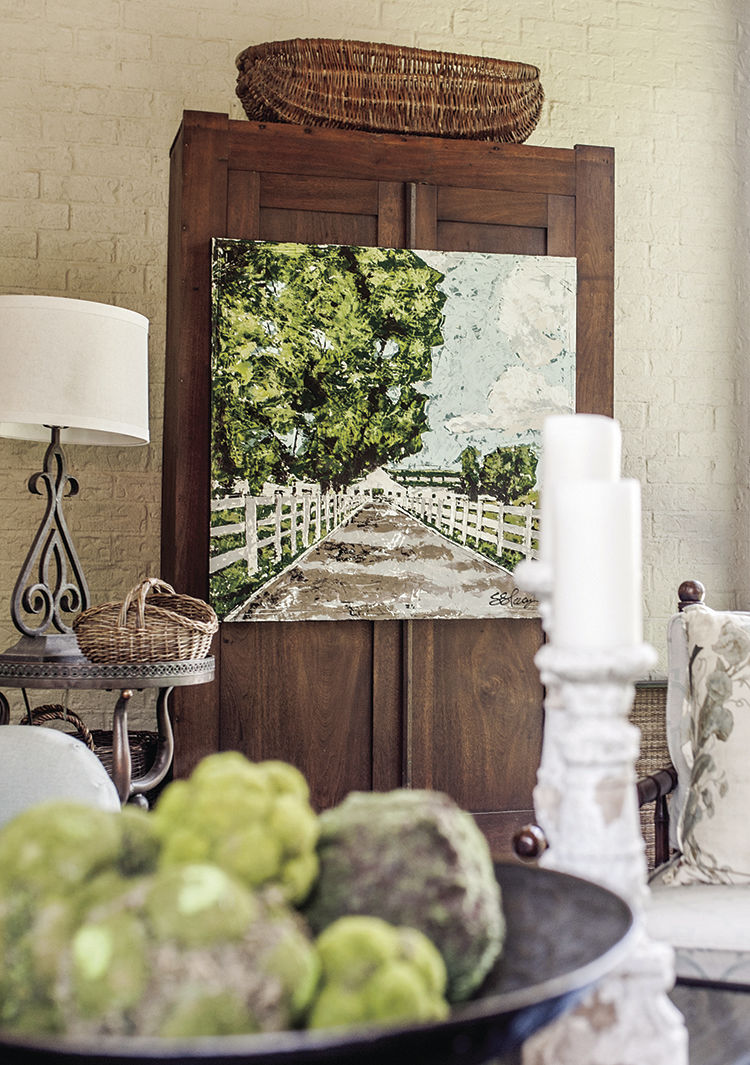 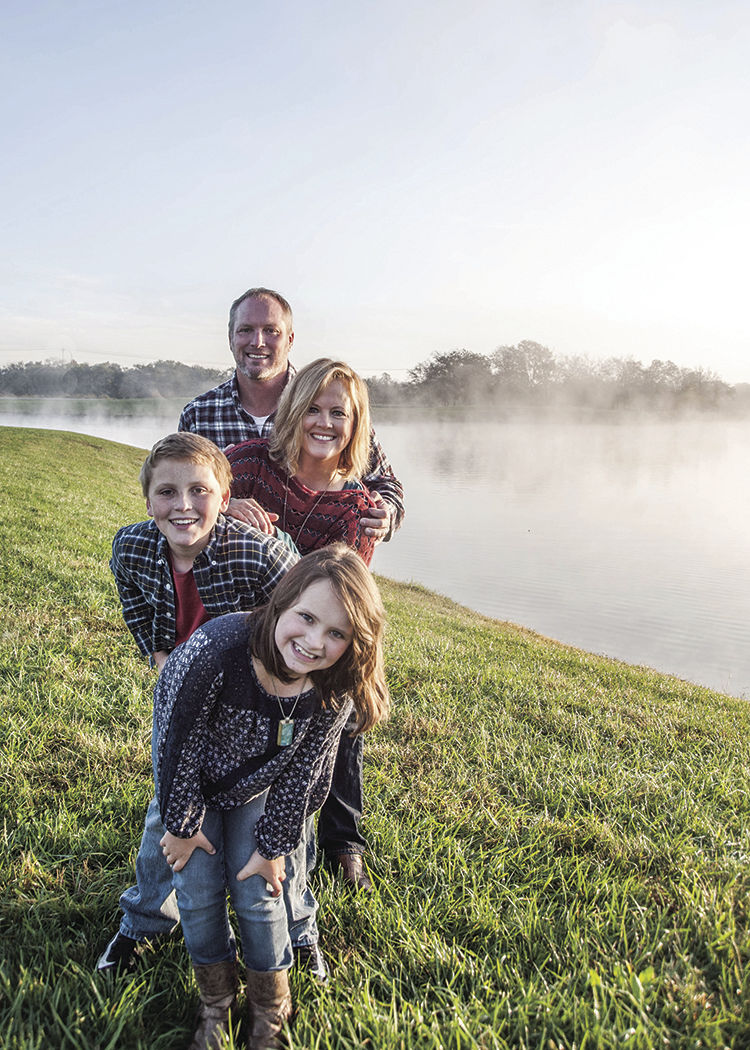 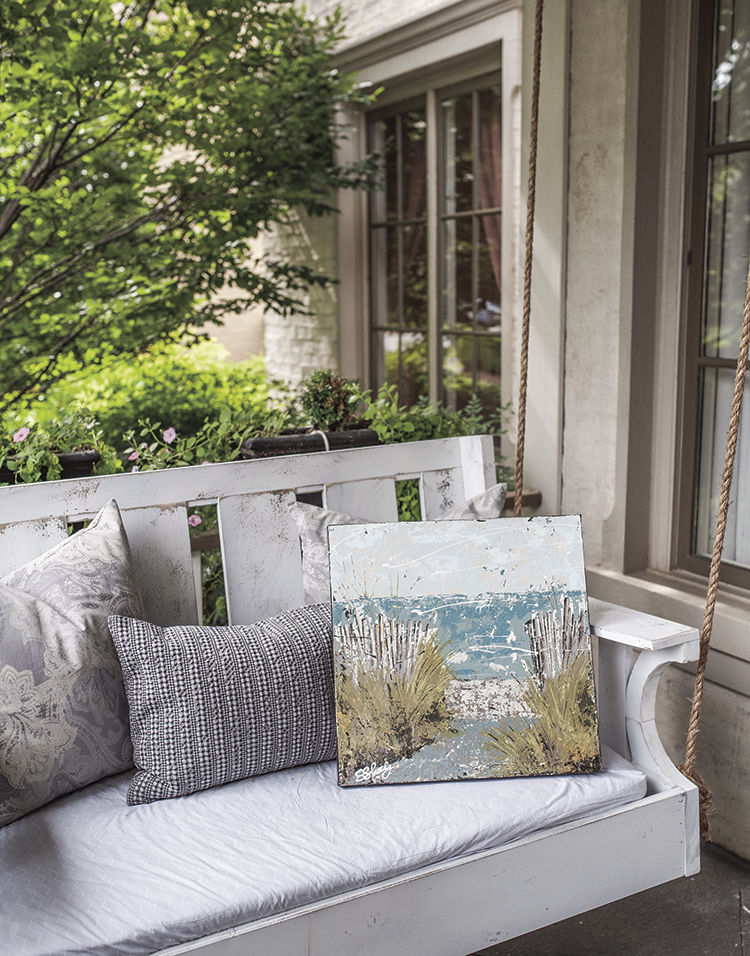 Through the large windows in the space over the garage, streams of light shine onto walls where color and nature collide.

Moonstring Arts Studio is the space, a sanctuary, in her Franklin home where Shari Lacy finds herself escaping work and family for her paintings. Her path has been one with purpose and a plan, yet with an added knack for throwing caution to the wind.

“I’ve tried to be somebody that doesn’t say ‘no’ out of the box. I told myself to use these next few years to say ‘yes’ and figure it out,” says Shari.

Shari grew up with a love for singing and art and graduated from Miami University/Oxford, Ohio’s Fine Art’s program. Her first job was creating brightly painted windows advertising store specials at the local grocery store in her hometown of Cincinnati owned by her aunt and uncle.

More creative jobs followed, then she made a surprising turn. “I took a job as a flight attendant and got to see things I never thought I would get to see. I got out of that shell, got to travel the world. I watched artists in places like Moscow.”

During that time, she met her husband, Dave, and made a home in Alaska.

In 1998, the Lacy’s moved to Nashville when Shari got a job with a small record label. Her marketing and public relations career in the music industry flourished, but several years later, she felt the pull to start her own business.

“I was in the entrepreneurial mode; I wasn’t afraid to step out and try it,” she said.

She formed a public relations company promoting independent music artists.  Running the business and raising a family took priority. As for painting, Shari admits, “I was quietly doing it on the side. Then, I took a watercolor class, that wasn’t even my medium, and a flood of love came back for it.”

“There’s the satisfaction of helping somebody, the blood and sweat of lifting other artists up. But, then I thought, I would love to see what I can do on my own,” Shari said.

It was time to nurture Shari Lacy, the artist.

Each piece depicts her own view and feelings of what’s around her. From the grass and fences by the quiet sand dunes, a single hummingbird and colorful flowers, spokes in a bicycle wheel to treasured places like the Ryman Auditorium and Harlinsdale Farm.

“I would describe myself as a mood painter,” says Lacy.  Her paintings appear peaceful and earthy, with a touch of color that exudes the very joy the artist experienced when painting it.

“People say they love the texture. It’s almost boring to me if I’m not using it. I have fun with it, it gives it depth.”

Her desire to “say yes and figure it out” had Shari facing unexpected fears. “I had the opportunity to paint with a choir live, in front of people. I got all worked up about it, I was a nervous wreck.”

With the help of a consoling friend and prayer, when the day came, she stepped up to that blank canvas, as sounds of the choir rang out.  And painted.

“It was the most amazing experience. I painted the white canvas to black and that got me out of it.” When the canvas was ready for more, Shari created what she described as an “emotive piece” reflecting the moment, and more abstract than she normally paints. Shari recalls, “Watching that process, hearing the words, it was a beautiful, fulfilling moment.”

From her first sale at a local shop, to gallery shows, to braving it live, one step has led to another with the intention of moving from hobbyist to professional. “I’ve always been a journey-minded person,” says the artist.

New doors continue to open. Shari has been featured in lifestyle publications and her artwork can be found in galleries, permanent collections and shops around the southeast, and in private collections around the country. Most recently, her work was featured on an episode of HGTV’s “Nashville Flipped”.

“It’s an honor for me for someone to have what I created. I want them to feel good, or think of something that makes them feel good. It’s a blessing to me in return, to be doing something for a living that I have dreamt about since I was 12.”

Shari’s paintings can be found at the Shop Around the Corner in Franklin and York and Friends Gallery in Nashville.  Visit www.sharilacy.com to learn more about her work.