You have permission to edit this article.
Edit
Home
Current Issue
Events
Past Issues
Advertising
Subscriptions
Williamson Herald
1 of 10 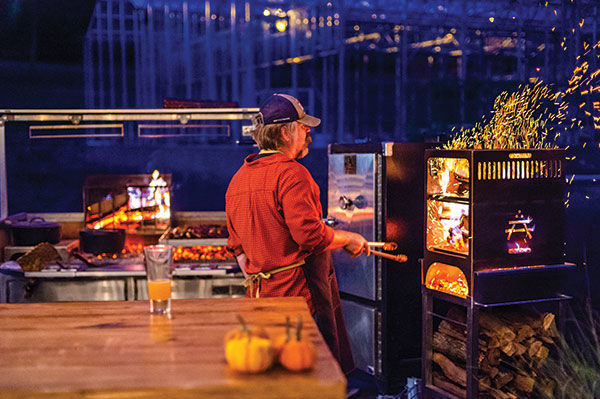 The Rambling at Southall 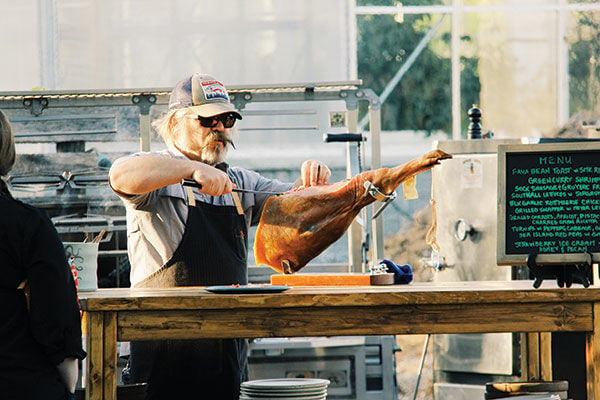 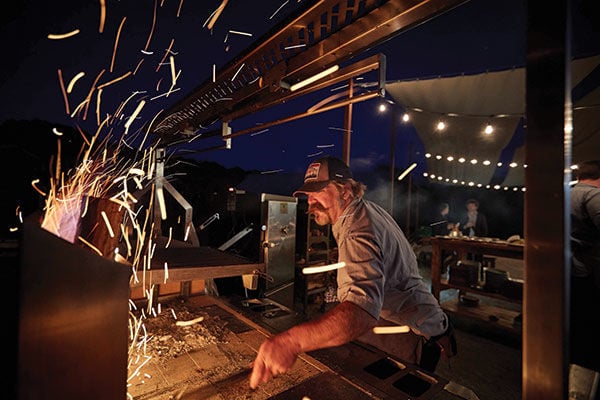 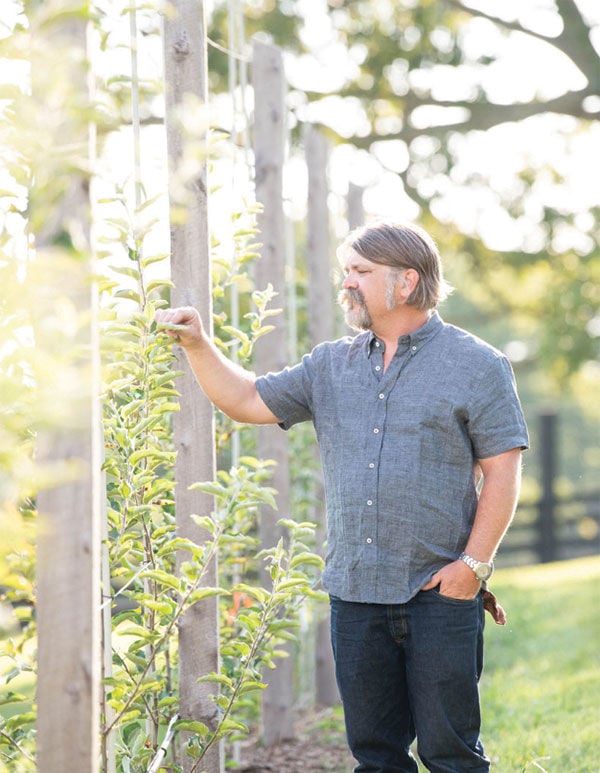 Chef Tyler Brown amongst the apple orchards on the property 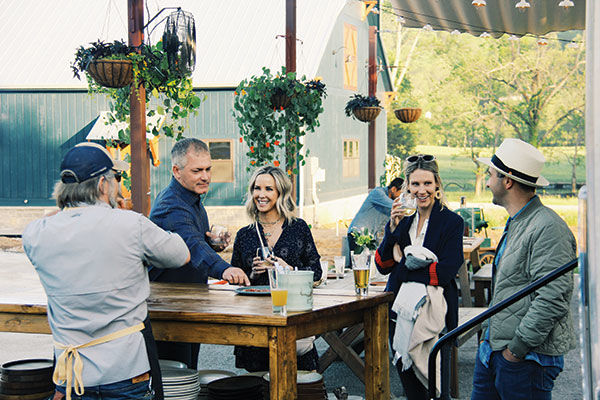 Chef Tyler Brown talks with guests at The Rambling at Southall 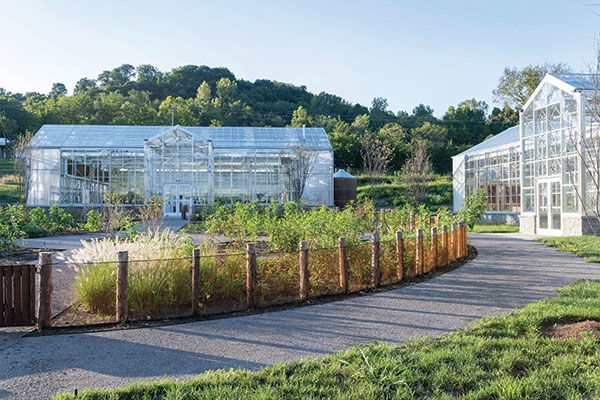 Greenhouse at the Rambling at Southall 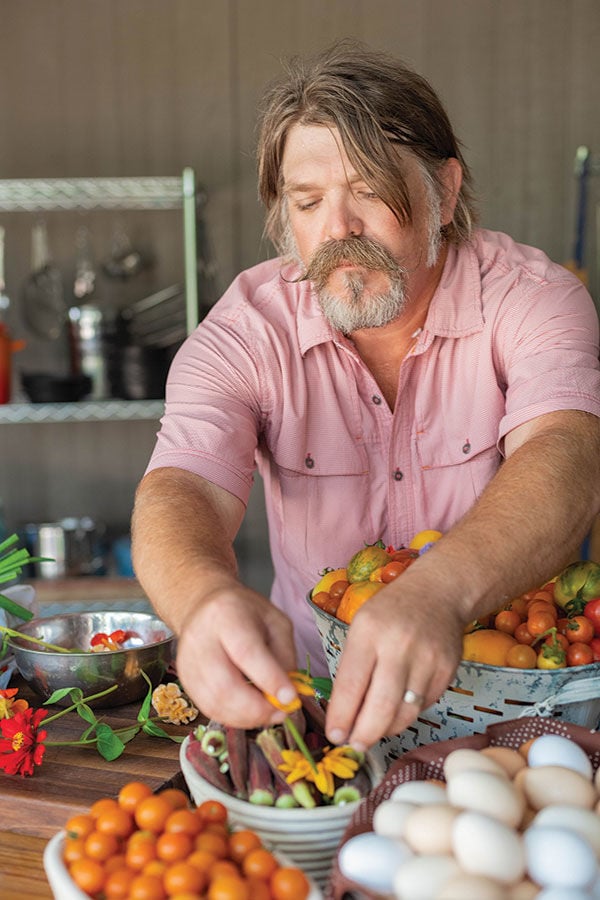 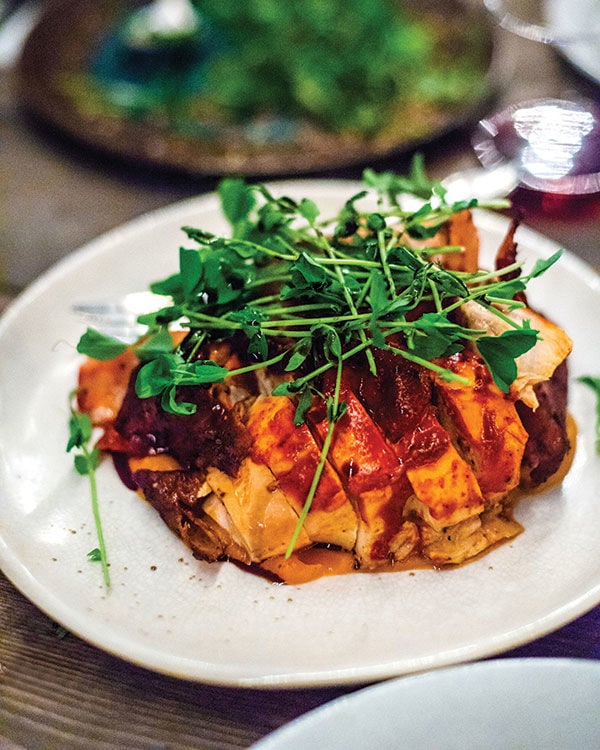 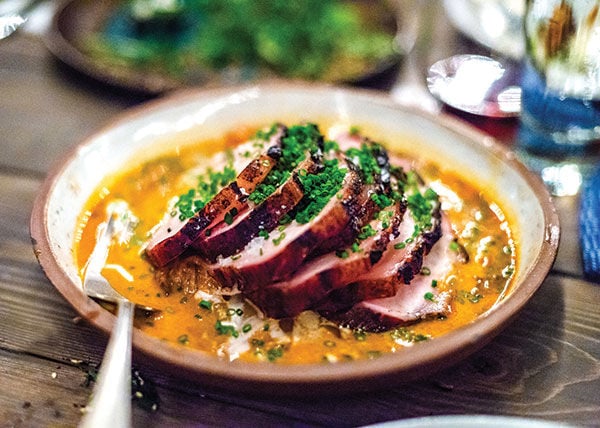 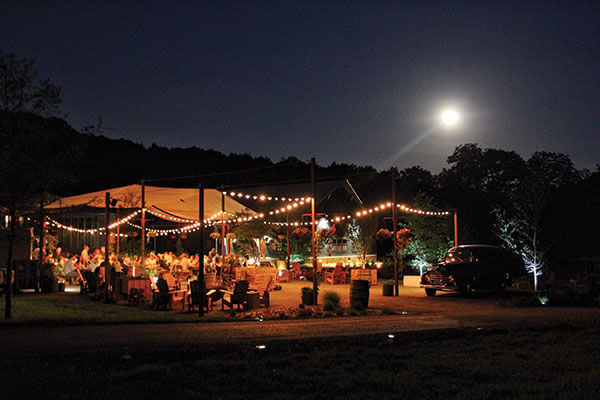 The Rambling under the stars

The Rambling at Southall

Chef Tyler Brown amongst the apple orchards on the property

Chef Tyler Brown talks with guests at The Rambling at Southall

Greenhouse at the Rambling at Southall

The Rambling under the stars

The Rambling at Southall Food Elevated

Driving up 65 North to reach a Kentucky backroad in late September, the golden hour streams through a haze of harvest dust and curing tobacco smoldering in the barns. Chef Tyler Brown is on a mission. It’s Rambling season at Southall, time to go get the hams.

Brown knows he can get country hams without driving three hours – his friend Ernie Greer makes legendary ones less than a mile away – but this is tradition. The late writer John Egerton, who did as much to document Southern foodways as anyone in the nation, introduced him to this farmer years ago. Guests at The Rambling, a seasonal series of private pop-up dinners hosted by Brown at Southall, will get the first crack at razor thin slices, as a precursor to a hyper-local, multi-course feast.

It’s just one illustration of the chef’s dedication to craft, among many. Just outside of Franklin on Carter’s Creek Pike, two glass greenhouses stand as welcoming beacons, demonstrating a vision for marrying agricultural tradition and modern technology to feed the body and soul as the raison d’être for Southall, a 325-acre luxury resort in development there for the last four years.

Case in point: on the left is a state-of-the-art hydroponic grow facility, where an ocean of leafy greens is reaching through a rigid foam base, their full root structures visible in the crystal clear water. Tanks of hybrid striped bass are under the same roof, spinning off a natural liquid fertilizer for the vegetables as they grow to fillet size for the table. At night, the soft pink grow lights help maintain optimal conditions to produce 400 pounds of show-perfect lettuces each week. In the adjacent propagation greenhouse, tens of thousands of seedlings are grown throughout the year, hardened off for planting across the property – warm and cool-season heirloom crops, but also pest-deterring companion flowers, native shrubs and vines, berries and nut-producing trees. It’s Brown’s nod to a larger movement called the Ark of Taste, sourced from coast to coast and around the globe… a “living catalog of delicious and distinctive foods facing extinction.”

Brown cites the bambara ground nut, which has origins in Africa.

“A friend sent me 20 seeds and we’re growing them at Southall now. This may be the only place in the country today serving bambaras, and it will be a thrill for me to one day share that with guests from all over,” he says. “Even in a much different geographical environment, we can find microclimates on the property that allow us to use old-fashioned farming sense while leveraging technology to grow really unique cultivars that make wonderful dishes.”

Having been nominated multiple times by his peers for the James Beard Foundation’s Best Chef Southeast recognition, Brown possesses an insatiable hunger for deeper understanding of his ingredients and the way things work together to sustain the circle of life. As executive chef at the Capitol Grille in the Hermitage Hotel, he helped put Nashville on the culinary map, launching the localvore movement here by starting full-scale vegetable and livestock production farms not only to feed the kitchen, but to educate the public.

It’s a matter of being purposeful, versus whimsical, he says.

“When you’re constantly learning and seeking better ways, you ultimately develop a better product,” Brown says. “The journey is the mission for me, and the reward is sharing a taste of that inspiration. It could be as simple as a memorable meal for a guest, but it could spark an interest that grows throughout a person’s lifetime.”

He learned early on how food and community intertwine, as his family always felt the evening meal was sacred time – it was at the dinner table where the personal exchange happened. That experience stuck with him as he looked toward his career. Growing up in Charleston, South Carolina, he attended culinary school there and became a sous chef at Peninsula Grill, where he formed a friendship with Chef Sean Brock, felt the power of the French brigade order in a kitchen, and gained experience in butchery, fermentation and other next-level techniques that seem cutting-edge, but actually harken back to our rural ancestors who were simply scratching a living out of the earth.

He later had a chance to rejoin Brock as his chef de cuisine at the Capitol Grille in the Hermitage Hotel. Then, a few years later, as Brock headed back to Charleston and Brown’s wife, Ashley, was accepted into a master’s program at Vanderbilt, it was the opportunity to become executive chef. Capitol Grille was shaped into a four-star, four-diamond destination by implementing seed-to-plate sourcing that started with experimentation in backyard raised gardens and culminated in the creation of the three-acre heirloom Garden at Glen Leven and 150 head of red poll cattle at Double H Farms, the largest herd of the dual-purpose Scottish breed found anywhere in the South.

But he wanted to dive deeper, to understand the biodynamic calendar and how it influences the end product, how the five senses are engaged in the process of learning, doing and sharing with others. In 2015, Brown brought together a team at Southall as its senior vice president of hospitality and agriculture, where he could combine all of his professional passions to create a sustainable luxury resort focused on landscape-scale, symbiotic food cultivation and an immersive epicurean experience.

On any given day on the farm, you might find the chef hunting wild mushrooms on the hardwood ridges, milling Webb Watson corn on a century-old moonshiner’s stone, or monitoring the progress of nearly 2,000 apple trees – 30 plus varieties – that the experts said he couldn’t successfully grow in Tennessee. Each was hand-grafted, planted onto a terraced hillside to take advantage of the southeast exposure. Water collected from across the property is pumped back up to irrigate the rows.

In order to bring the vision for Southall to life, Brown had to walk away from the pinnacle of a food city in its shining moment. Now, as construction begins and he looks toward opening in early 2021, it all seems worth it.

Brown and his team created The Rambling at Southall as a way to give people a taste of what’s to come, and to feed his desire to share his art with the community. Each spring and fall, friends and family are invited to dine under the stars on the farm, enjoying yard games, good drink, music and each other before embarking on a multi-course, constantly changing meal featuring whatever’s fresh that week – all prepared on live fire.

It’s a test kitchen of sorts. Brown points out that he’s focused on heirloom crops and the lore behind them – not necessarily because they have a great story, but because the legend derived from the discovery and careful cultivation of what became a great product.

“There’s a place for imperfection – we may use a certain beet because of the shape or the flavor, but the color is not as vibrant,” he says. “There are beautiful pumpkins and tasty pumpkins, and my experience is that the better looking a tomato is, the weaker it is taste-wise. That’s why I gravitate to heirlooms, and why other farmers came to that same conclusion long before me.

“Best practices are a constant evolution, but we’re mindful of how everything works together to sustain the circle of life in a generational kind of way. It’s principle-driven: seasonality and sustainability, leveraging the best of what modern agricultural science has taught us.”

And it’s the ethos behind Southall, from the inn to the spa to the table, all rooted in this sacred land and the people who depend on it.

What an incredible restaurant. You can really tell that the chef has a passion for what he does. And the commitment to fresh ingredients is inspiring. Spending all of that time growing plants in the greenhouse, then planting in the garden demonstrates true dedication to the craft. I only hope to one day be as dedicated about something as this man is to his restaurant. https://newyorkessays.com/essay-how-violent-was-the-old-west/