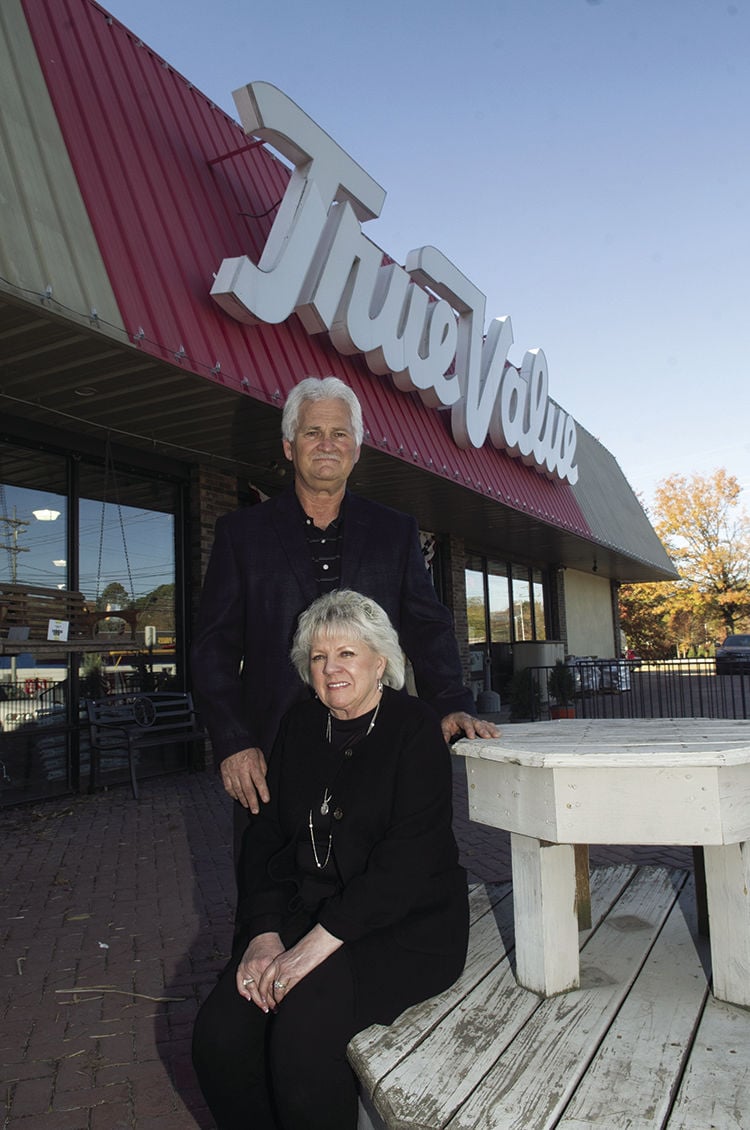 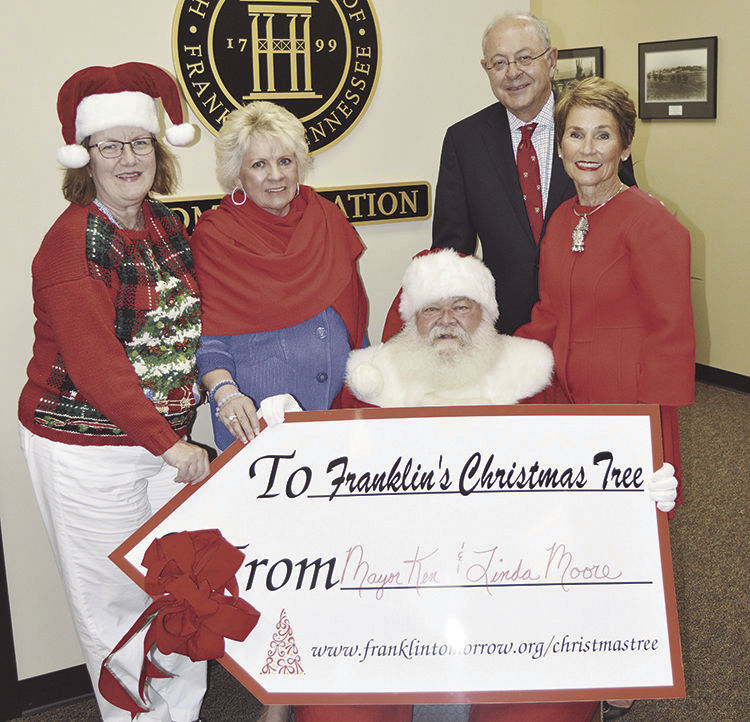 For the “We need a little Christmas now” Franklin Tomorrow fundraiser, Franklin Mayor Ken Moore and wife Linda donated to the campaign to raise money for a new Christmas tree to be displayed  on Franklin’s Public Square. With the Moores are Mindy Tate of Franklin Tomorrow, Shelley Moeller of Harpeth True Value and Pat Petty (Franklin’s Santa Claus). 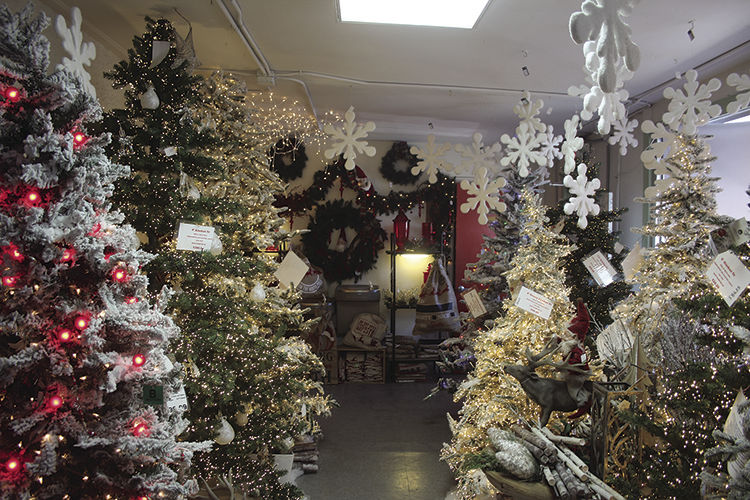 For the “We need a little Christmas now” Franklin Tomorrow fundraiser, Franklin Mayor Ken Moore and wife Linda donated to the campaign to raise money for a new Christmas tree to be displayed  on Franklin’s Public Square. With the Moores are Mindy Tate of Franklin Tomorrow, Shelley Moeller of Harpeth True Value and Pat Petty (Franklin’s Santa Claus).

Twenty years ago, Columbia Avenue was just another service-shop state highway on the outskirts of town. That’s when Mike and Shelley Moeller first noticed the hardware store.

Having raised their family in Missouri and New Jersey, the Moellers were transferred to Nashville. Mike with CNA Insurance and Shelley with Manchester, a manufacturer of propane tanks who had selected middle Tennessee for a new office.

Shelley knew the store and the True Value folks from her work in propane sales. When the owner offered to sell, the Moellers saw an opportunity.

“It was a different here in the late ‘90s, and they were struggling. I remember a bunch of lumber inventory and not a whole lot more,” Mike says. “We saw a need to grow and diversify, sowe broadened the retail side and added lawn and garden, party and equipment rental, and the Christmas store. We took on five departments all at once because we didn’t know any better.”

Shelley’s company had been acquired and she was looking for something to do, and the store was the perfect fit.

“We survived by focusing on service and responding to our customers’ needs,” she says. “We got involved in the community and Franklin got behind us. We are so appreciative of the support we’ve seen through the years.”

Mike’s company was sold a couple years in as well, and he joined the staff at Harpeth True Value. He focuses on IT and personnel – they started with four employees and now have 32 – but seven days a week, you might find him servicing rental equipment, helping a customer find an item on the sales floor, or working with a builder on a lumber package.

“We sell quite a bit of lumber to local builders, and to home owners,” Mike says. “There’s not much at the big box store that you can’t find here.”

Combine that with the lines of products that Shelley has added to the mix, popular brands like Yeti coolers, Weber grills and the Big Green Egg ceramic grill/smokers. These aren’t typical True Value lines, but Shelley recognized the potential, and that her customers would want them.

“These brands are the best, and they stand behind their products the same as we do,” she says. “We go to market in March, and that’s where I found these items and also how the Christmas shop got started.”

Shelley says the Garden Center was doing very well, but it sat vacant for six months in the off-season. Now she buys Christmas merchandise in March, starts receiving and processing it in July, and is ready for the now-annual tradition of the Harpeth True Value Christmas Open House on the first Thursday in November each year.

“We start making the transition in late September/early October at the Garden Center, but we’ve resisted starting that early in the store. The men don’t like it,” Shelley jokes. “But the seasonal items allow us to maintain the Garden Center staff year-round.”

Mike says it was Shelley’s experience in corporate sales that gave her the insights she’s applied to the retail side. The recession in 2008-2009 tested their fortitude, but they made it through by cutting expenses and doing a lot of work themselves.

“We washed the floors and cleaned the bathrooms and tightened up everywhere we could. I think that experience made us better managers,” Mike says. “Through all that, we still work together every day and don’t really argue about anything. We see old guys who come in retired and bored, and we just love doing this. When you lose your sense of focus and purpose, the physical part starts to decline as well. We’re going to keep doing this as long as we can.”

For the Moellers, that’s more than staffing their store seven days a week. It’s teaching Sunday School, being involved with the Chamber of Commerce, and volunteering for the Heritage Foundation. You can find them behind the scenes on a number of community initiatives, like Franklin’s new Christmas tree.

“We were at the tree lighting last year and thought it was time for a new tree, so we went on and ordered it while I was in Christmas buying mode in March,” she says. “We talked with Mayor Moore and Franklin Tomorrow, and now we have a public-private partnership underway that is raising the money for the tree. It’s an incredible thing.”

The new tree, twice as tall at 40 feet high, energy efficient and guaranteed to last many years, will be lit for the first time during the ceremony on Thursday, December 1. It’s just part of being an active member of the community, Shelley says.

Looking back on another great year, the Moellers agree that it’s those people who continue to drive double-digit growth.

“People can easily order online or go to the big retailers, but they don’t want to do that,” Mike says. “They know they can buy from a locally owned store. It’s not us driving that growth – it’s Franklin. We’re just proud to be a part of it all.”

To get involved with the Christmas Tree campaign, stop in the store or contact Mindy Tate at ChristmasNow@FranklinTomorrow.org.