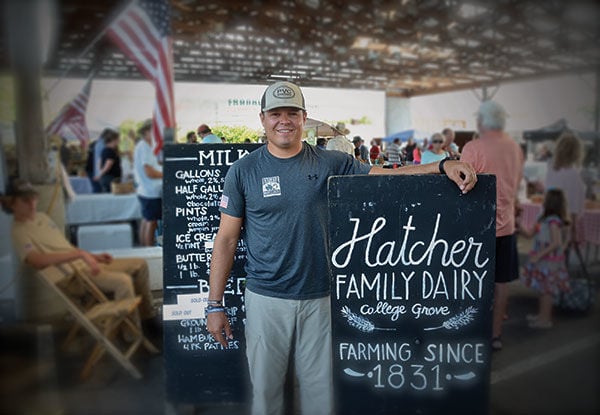 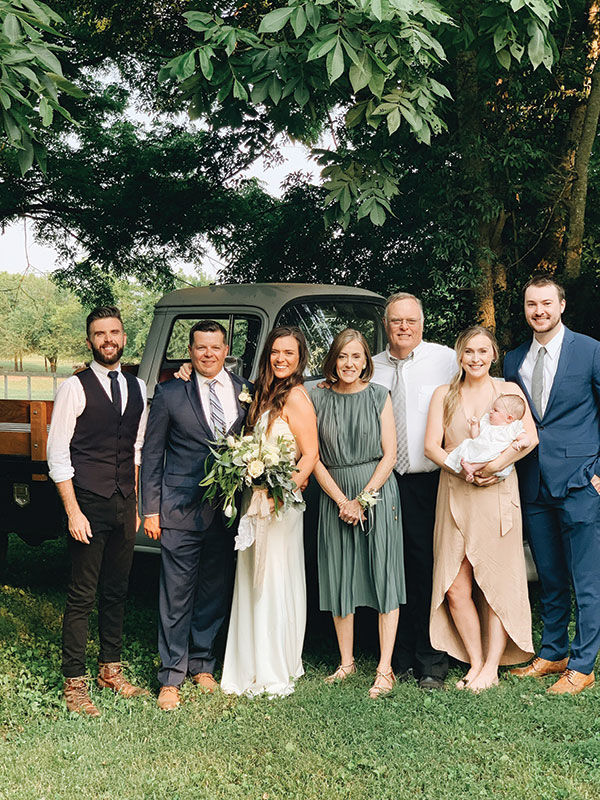 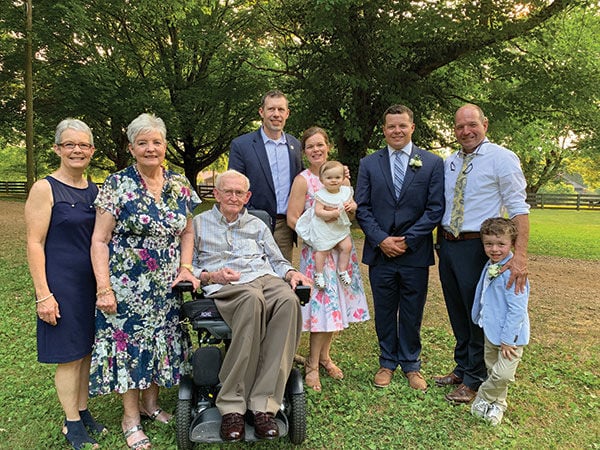 Twice a day for nearly 200 years, a Hatcher has been milking the cows on a farm in College Grove. Technology has evolved and the dairy business has changed, but the core responsibility has not.

Now the fifth and sixth generations of Hatchers, respectively, are playing lead roles in bringing fresh, premium quality milk products to market. People like Charles Hatcher, a 30-something who oversees the operations 365 days a year. His father, Charlie, long respected as a matriarch of Williamson County’s farming community, was named Tennessee’s commissioner of agriculture in January.

Rain or shine, holiday or weekday, the Hatchers are milking 92 cows – Brown Swiss, Jerseys and Holsteins – twice a day, at peak production yielding up to 6,000 gallons a week to be quickly cooled down, pasteurized and bottled for customers to buy within a day or so.

“Every twelve hours, those cows have to be milked, and the process takes about three and a half hours. That’s almost eight hours a day just in milking, not counting the other chores and duties,” Hatcher says. “You have to attach the milking machine to each cow, and we bottle every drop that we produce.”

Summer time is the hardest, he says. As heat puts stress on the cows, they decrease production. They don’t eat as much during the day, just as hot and tired as the rest of us.

Summer is also in the thick of preparation for football season. Hatcher serves as the head junior varsity coach at Page High School, and works as a sideline coach on both sides of the ball for the varsity games on Friday nights.

It makes for long days, but it’s a way of life, he says. One that he intends to preserve.

“We were at a crossroads around 2005 and I was graduating high school. Dad asked me if this was something I wanted to continue,” he explains. “I said absolutely, our ancestors would be kicking us from the grave if we’d sold it. Bottling was a crazy idea back then – no farmers market, no restaurants that really cared about local food – but we started selling at College Grove Grocery and it all just grew from there.”

Call it lucky timing or an inspiring story of locals banding together to create a boutique industry, but not long after, the Franklin Farmer’s Market was launched with Hatcher Dairy as one of its first vendors. Restaurateurs like Andy Marshall at Puckett’s and Ryan Pruitt at Frothy Monkey saw what Hatcher was doing, and found value in supporting it.

“It was really a local effort. Everyone got on board with it and that’s how this whole thing got started,” Hatcher remembers. “We wouldn’t be where we are unless all of them were willing to spend a little more for their customers.”

The process of converting from selling tanker truckloads of ultra-pasteurized milk destined for Publix to bottling premium skim, 2%, whole and chocolate milk, along with half-and-half and whole cream, required a major gamble. But the Hatcher family was all in.

Today, the dairy’s goal is to have its products collected from the cow and in a customer’s hands within 24 to 48 hours – often times, it’s within the day. Milk is heated in the pasteurization process, then quickly cooled down to 37 degrees before being homogenized, which incorporates the cream into the milk. Hatcher Dairy’s signature product, whole milk, is not homogenized – the cream is at the top, as natural as it can be.

A lot of the products available at grocery stores are ultra-pasteurized, which extends the shelf life significantly. But the more you heat it, Hatcher explains, the more nutritional content is cooked out. The amount of fat percentage also changes all the time, based on what the cows are eating – various grasses and legumes produce different fat percentages. The cows are on pasture year-round, and the best, creamiest milk is to be had from early spring into May, when the cows are feasting on winter wheat and crimson clover.

They’ve continued to expand the product lines: Jumpin’ Jimmy, caffeinated chocolate milk, was the brainchild of Creamery Manager Jim Hatcher, who saw an opportunity to create a low-fat milk with whey protein and caffeine added to it. Aside from being a tasty morning alternative to coffee, several gyms in middle Tennessee sell it as a healthy post-workout recovery drink.

During certain times of year, when milk production is high and a surplus of cream is available, the Hatchers make butter, ice cream and egg nog as a special treat for customers. Monday through Saturday, from their store on the farm, they also sell biscuits in the morning and burgers to lunch crowds and kids on school field trips, along with steaks, eggs, and the full assortment of dairy products, as well as local jams, jellies and honey.

“It’s a family effort – both parents, my aunt and uncle, my sister, my wife (Mary Morgan Gentry, of another familiar historic farm family) are all involved,” Hatcher says. “We ran out of family members so we brought on other locals – delivery truck drivers, farm help, the ladies that cook and run the store. My nephew is 5 and a half and he helps milk and feed cows.”

Hatcher’s sister, Jennifer, and his father are both veterinarians, and the latter served as state veterinarian for many years. They’re focused not only on the health of their herd, but on the perpetuation of a legacy for the benefit of all Tennesseans.

Back before the slow-food movement, milk was just another commodity, sold through a cooperative. As prices were squeezed, the costs kept going up. Hatcher sees the prescient decision to convert to bottling and selling locally as one with long-term implications for his family, and the community they serve.

“We’re one of two dairies left in Williamson County. This industry is facing some challenging times,” he says. “Two years ago there were almost 400 dairies across the state, and now that number is less than 200. It’s becoming a lost way of life and industry, as milk consumption has gone down and prices have gone up.”

But in 2019, customers want to know where their food comes from, to meet the farmer and hear the story behind it. So many relationships have come out of the experience for the Hatchers, not only from the Farmer’s Market each weekend, but from spring and fall school tours that bring as many as 100 kids a week to the farm.

“Kids come out and believe that milk comes from a grocery store. The average age of a farmer is in the 60s in America today, and not a whole lot of young people want to do it,” he says. “I take a lot of pride in being in my 30s, continuing my family business and having a next generation of Hatchers growing up to carry the flag. We don’t take for granted the fact that we have an opportunity to do it.

“There’s nothing easy about it – on Christmas morning, Santa Claus and I are up milking the cows. But we couldn’t imagine life any other way.”