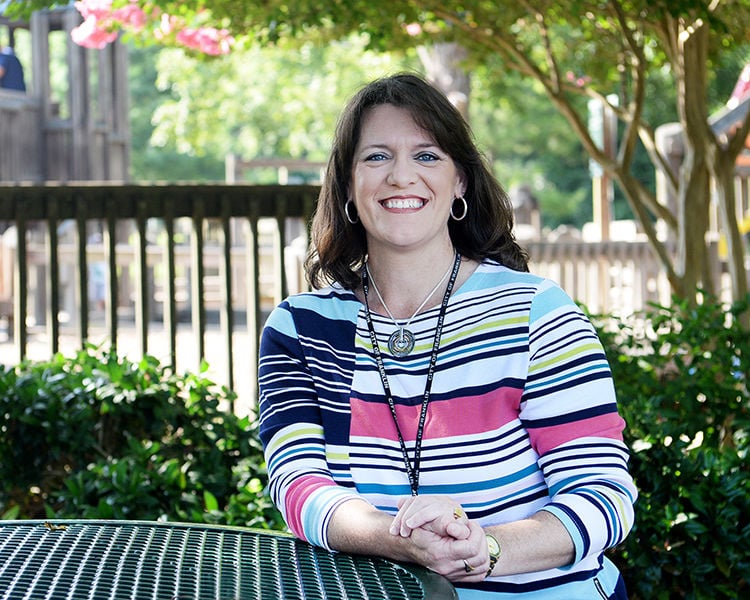 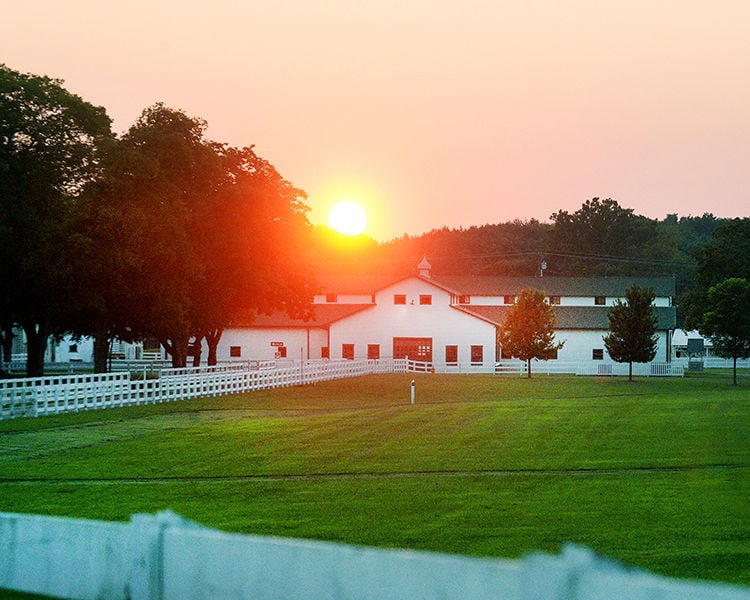 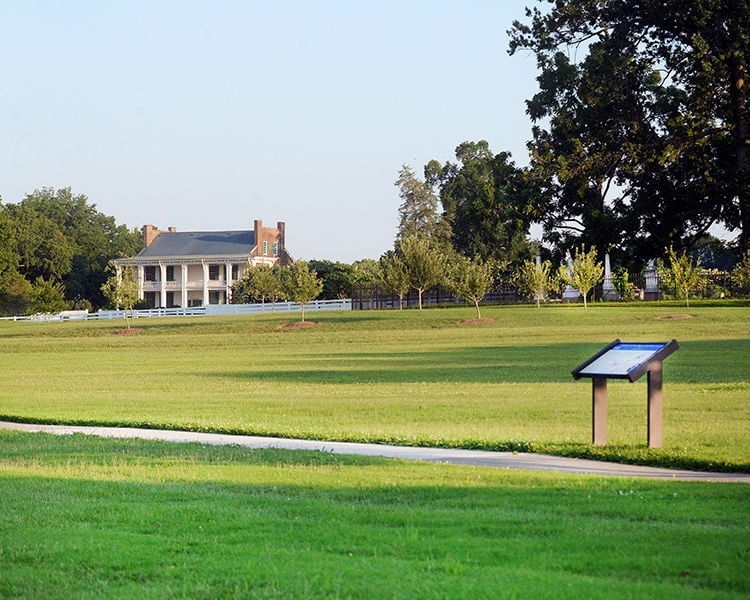 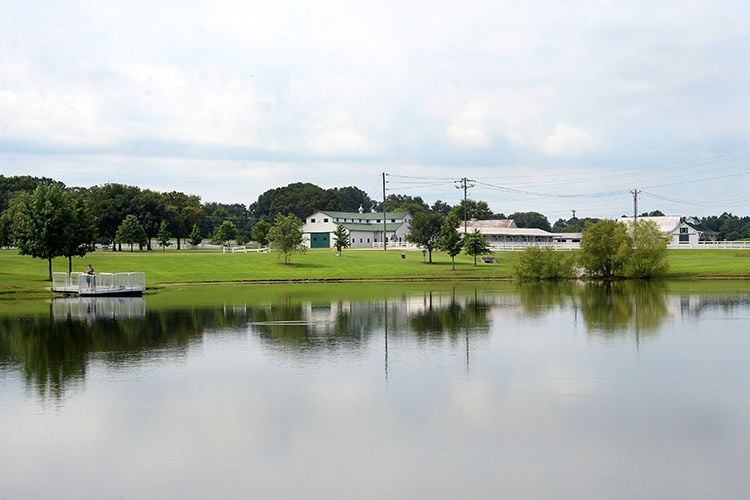 Pinkerton Park is a dream.

The “Tinkerbell Playground” encompasses slides and swings, wooden towers and platforms, and secret corners that rouse a child’s imagination. Nearby are pavilions and picnic tables, walking paths and fields for family get-togethers, ball playing, or simply down time and a breath of fresh air.

Wrapping around this community park is the Harpeth River where canoers paddle the serene water. A trail connects to Fort Granger, a Civil War fortification built by the Union Army, where left in its wake are just the trenches dug by soldiers and untainted views of Franklin. Generation to generation, memories have been made at this park.

Pinkerton is just one of 16 parks owned and operated by the City of Franklin with a mission to bring quality of life to area residents.

At the helm of the city’s award-winning parks system is Director Lisa Clayton.

The South Carolina native journeyed to Tennessee to finish graduate school. “I fell in love with the people and the state,” she said. “I began my career in the Parks and Recreation field as the Director in Jonesboro, the oldest town in Tennessee. It was a wonderful place to grow not only for someone new in their career, but I had so many wonderful mentors. It’s where I learned about historic zoning, that beautification means something, and telling someone else’s story is ok, as long as you tell it sincerely.”

Clayton was awarded the City of Franklin Parks Director position in 2002. Under her leadership, she’s seen the Parks’ land ownership grow from 300 acres to what will nearly be 1,000 acres by the end of this year. Overseeing seven divisions and supervisors, her duties stretch over personnel and planning, construction and community outreach, and she often speaks to groups sharing the Parks’ vision and plans.

“The one thing that’s different about Franklin is the historic aspects. The historical parks have such a prevalence here, and having that scope of responsibility is something I take pride in,” said Clayton.

Passive parks include some of the most pivotal Civil War history in plain view. At the Eastern Flank Battlefield Park, visitors can walk the pathway on the same ground that saw the Battle of Franklin. Within steps is the grandest landmark, the Carnton Plantation home and neighboring McGavock Cemetery that whisper the past and commemorate the heroes who fought here.

Jim Warren Park is a 58-acre active park where recreation abounds and kids grow up playing favorite sports like baseball, football and basketball.

The Park at Harlinsdale Farm sits on 200 acres of the former Tennessee Walking Horse breeding farm, built in 1933 and made famous for its prize stallion Midnight Sun. Horses have come back by way of a newly built equestrian arena and trail. Every bit of the main barn, old structures and farmhouse are being renovated under a master plan. There’s a fishing pond and dog park, and that glorious backdrop photographers love. Colorfully rustic barn walls and vast greenspace make it a special setting. Visit at sunset and there is no argument.

Clayton said, “It’s important that we preserve not only the history, but also the architecture, because once it’s gone it’s gone. It’s what you can’t see at Harlinsdale that I’m very proud of – to not think about what takes place over the next 10 years, but what happens over the next 50 years. It’s adding the correct infrastructure now to allow for future use.”

Park events are the picture of Americana. Live music, food trucks, family movies and arts festivals, the city’s parks are home to over a dozen events each year like the Great American BBQ Festival and the Pilgrimage Festival. General use and special events bring over 100,000 visitors each year.

When asked of her favorite park: “I come from an athletic background and grew up in a small town in South Carolina where parks and recreation was the only recreation we had. I still love the crack of a bat, I still love to hear children playing at playgrounds, so probably for me Jim Warren and Pinkerton, those traditional areas.”

So fast, thousands of homes are popping up on the southeast side of Franklin. The City is working alongside that growth to transform almost 200 acres of local parkland into playgrounds, fitness trails and event space.

“I see grandparents as caregivers during the day; it’s harder for them to mobilize,” she said.  “It’s having more ADA (American with Disabilities Act) components, we’ve always added those, but we need to make sure it’s completely inclusive so that anyone can utilize it in any form or fashion.”

A Leadership Franklin group put in a fishing dock at the pond at Harlinsdale, inspired by a member who had an ailing mother who loved to fish, but couldn’t make the trek to the pond. The city is now working on a parking area and an ADA accessible walkway to the dock. “You never know who it affects; everybody has a story,” said Clayton.

Since making Franklin home, some of Clayton’s family members have followed. Now, she sees her job through the eyes of a mother; her greatest joy being her daughter, Judy Grace (5), whose favorite spot is the Tinkerbell Playground.

“I truly love what I do. I’m very passionate about public service, but especially public service in this area, I don’t think there’s a better community to do this than Franklin.”

Visit www.FranklinTN.gov/parks or call 615.794.2103 for more info on all parks and amenities and to plan a visit.

Rebecca Bauer is a Maryland native that has called Franklin home for the past 15 years. She is the Marketing and Community Relations Manager for the Franklin Theatre, as well as freelance writer and photographer, and lifelong horsewoman.