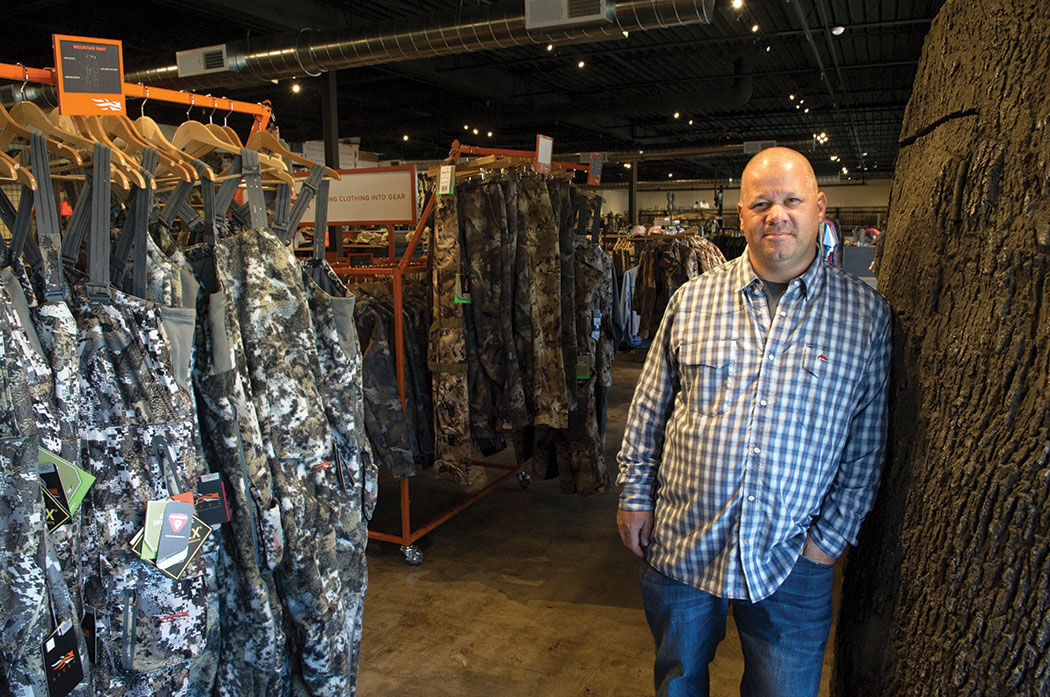 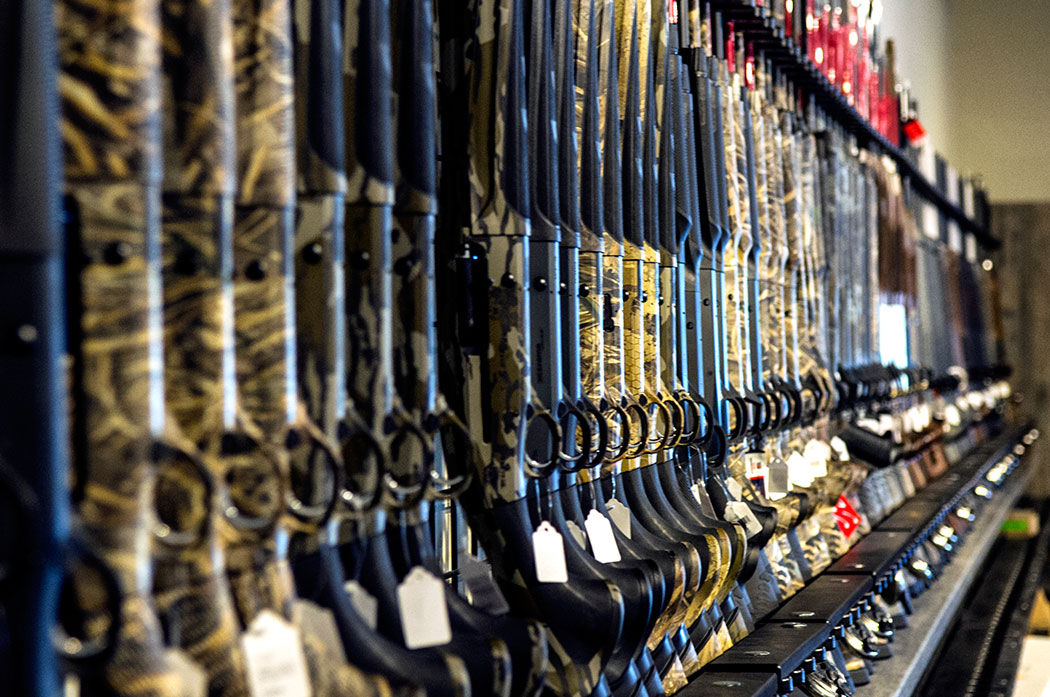 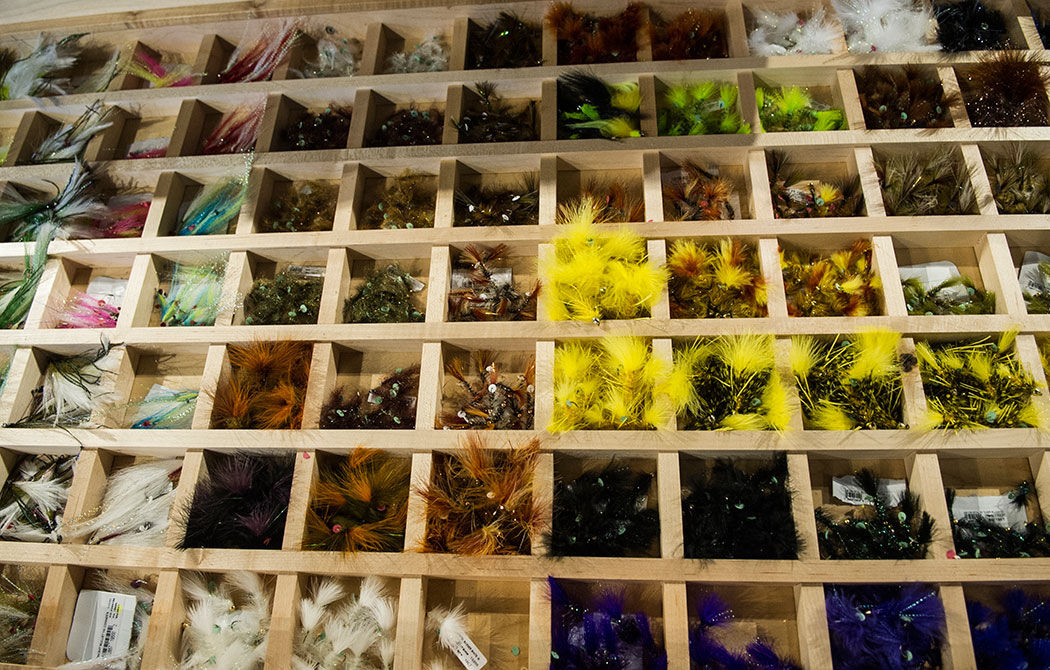 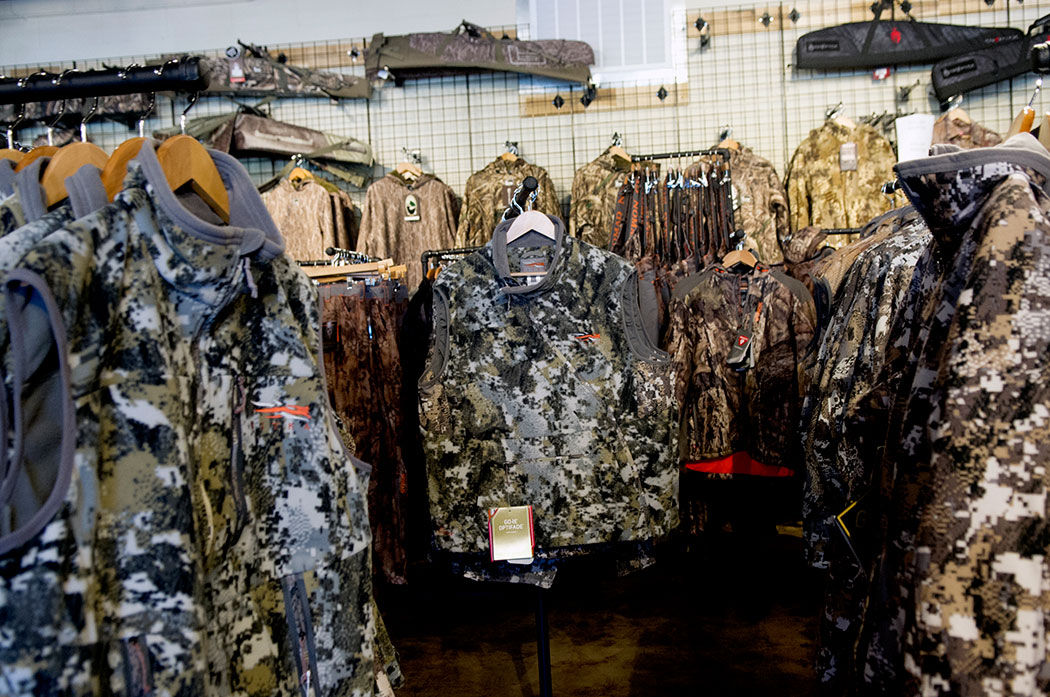 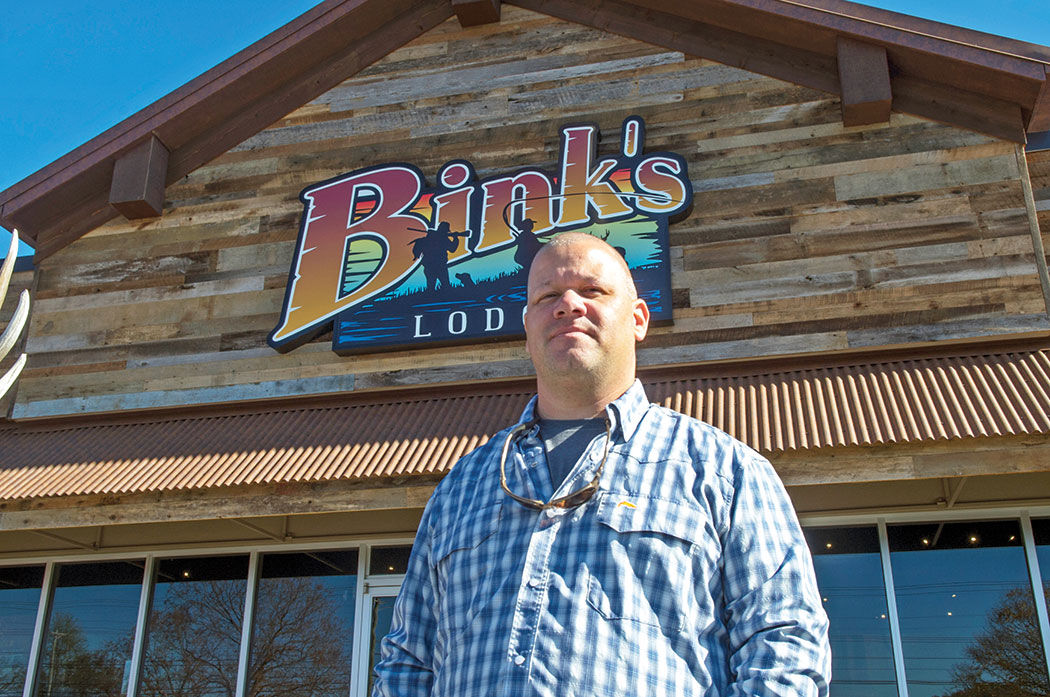 Bink’s Lodge opened on Columbia Avenue in the fall of 2016. 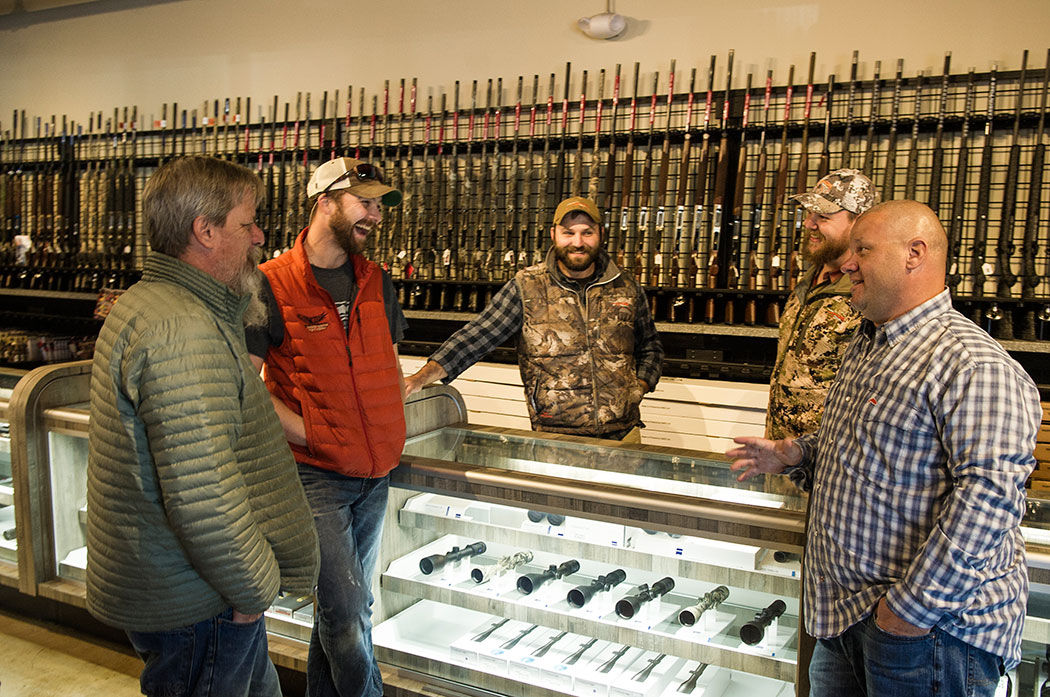 Bink’s Lodge is a place for hunters and anglers to connect and to gather supplies for the next adventure. 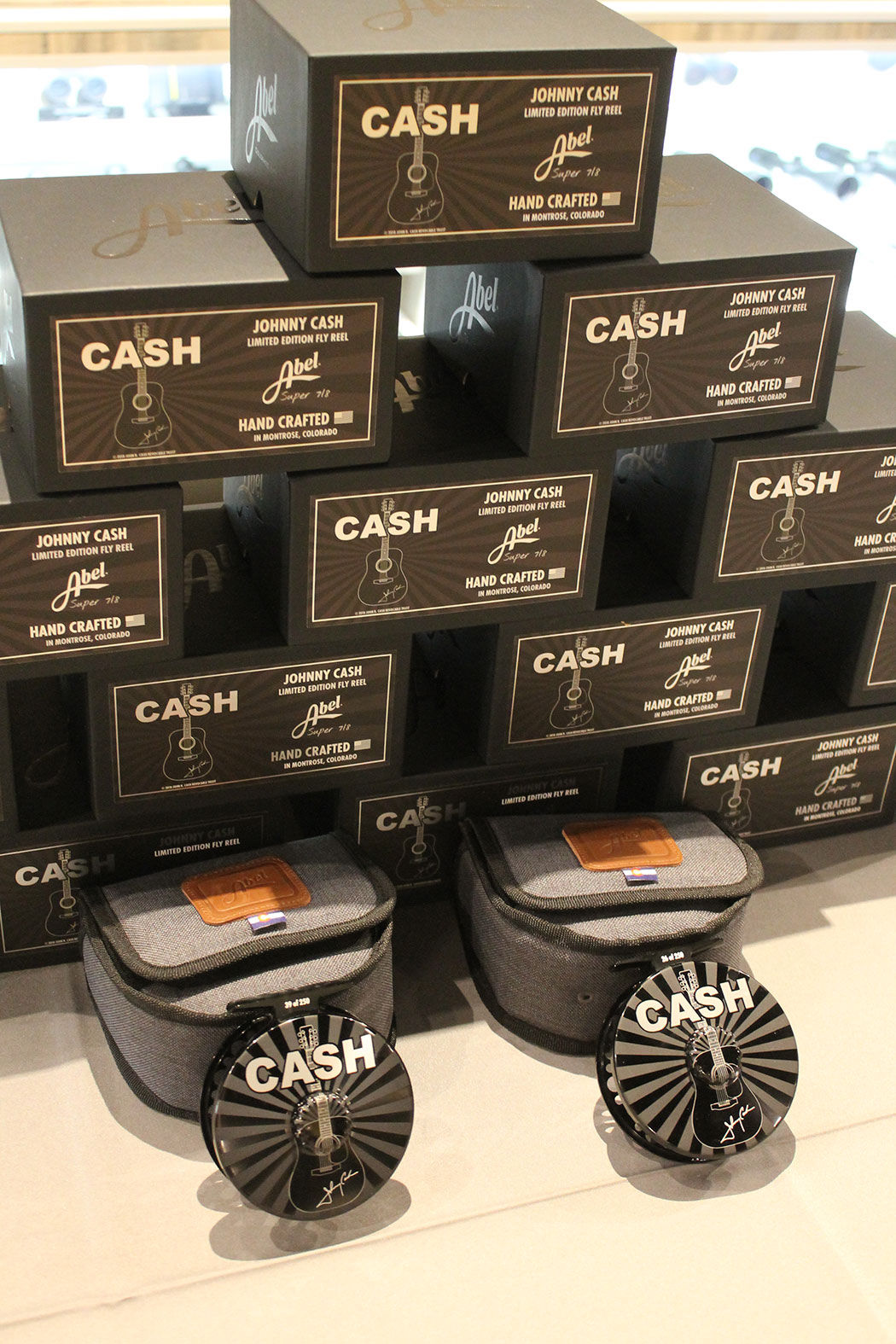 The commemorative Johnny Cash edition of the Abel fly fishing reel, which recently rolled out at Bink’s Lodge.

Bink’s Lodge opened on Columbia Avenue in the fall of 2016.

Bink’s Lodge is a place for hunters and anglers to connect and to gather supplies for the next adventure.

The commemorative Johnny Cash edition of the Abel fly fishing reel, which recently rolled out at Bink’s Lodge.

Brandon Binkley remembers shooting bows with his dad at the Lost Arrow Archery Club on 96 West, where the Westhaven Golf Club now sits. He was born and raised in middle Tennessee, but a man let the Binkleys hunt on some property back then in Fly, Tennessee, out past Leiper’s Fork. Some of his best memories are of those days, always stopping to get a biscuit at Puckett’s Bi-Rite in the village that was known as Hillsboro at the time.

He didn’t come from money—in fact, the idea of Bink’s Outfitters was loosely born with a high-interest loan from a check cashing store, used to purchase $400 worth of camping equipment that he sold out of the back of his Honda Accord and on eBay, with the profits reinvested. He hasn’t borrowed a dime since.

“That first $400 was backpacking gear and Nalgene bottles, that kind of stuff,” Binkley says. “It started with a couple of packages every other day, then my little Accord was full of packages every day and I needed a store.”

Bink’s Outfitters opened its first location in 2003 on the Square in Murfreesboro and found immediate success. But the game-changer, he says, was a music festival that had launched a year prior, just down the road in Manchester.

“We had found these open-back rubber shoes with holes in them that people were buying like crazy. The first version was called Waldies, then someone put a strap on them and called them Crocs,” he remembers. “We couldn’t keep them in stock, so we took a tractor-trailer load to Bonaroo and sold out both years.”

By then, the retail store had developed a reputation as a resource for outdoor enthusiasts in the I-24 corridor from Nashville to Chattanooga, carrying canoes and kayaks and serious camping equipment. But Binks, as his friends call him, soon realized that that type of item was a rare purchase, something a customer might buy every 10 years or so.

He says people thought he’d lost his mind when he started carrying North Face and Patagonia clothing items—still serious gear, but certainly fashion statements in many circles. Then it was Southern Tide for men, and Uggs for women. He tells the story of a University of Tennessee student walking in one day with a red tri-star logo hat, hoping to sell some to people who would be proud to wear the state flag’s iconic insignia.

At that point, the Bink’s Outfitters footprint had grown to include a store on Franklin’s storied Main Street, a second in Murfreesboro, one in the Hill Center in Green Hills, and others in Clarksville and Hendersonville.

“I bought a couple dozen for each store and sold them literally within hours,” he says. “I asked for more colors and he got them made and we sold those. That company became Volunteer Traditions, one of our top selling lines, and it started with a local college kid who had a great idea. It’s pretty cool to have played some part in his success, and he’s a friend of mine now.”

Brandon and his wife, Christie, had moved to Franklin in 2007 to open the Main Street store. They were starting a family, the business was making money, and they had a nice home in Westhaven, near where he and his dad used to shoot bows. One night, a fire burned that house to the ground, forcing a hard look at life’s priorities.

“We lost everything in that fire, and it was through that process that I realized I had drifted from my roots, from the values my dad had taught me,” Binkley says. “In the meantime, running stores and raising kids and just being busy, I’d drifted from him. So I decided I was going to go back to doing what I wanted to do, and we bought some land in Leiper’s Fork. That brought me closer to my dad, to nature and to God, and all three of those really needed to happen.”

Binks started hunting again, spending time in the quiet of nature with his father, then with Christie and before long with his daughters. His friend Ray Howell was often there too, and another idea was spawned.

“More than anything, that was a time of healing, and a way to reconnect with my dad and spend time with my family and close friends doing something we love,” he says. “Ray and I talked about this Bink’s Lodge concept for a couple of years, and then some other friends were in the conversation and it started becoming real.”

Bink’s Lodge opened on Columbia Avenue last fall, offering a broad selection of clothing and gear for hunters and anglers, from rainwear to footwear, decoys to waders, compound bows to fly rods and sporting arms, and just about anything else an outdoors person might need in pursuit of fish and game. A year in, Bink’s has just announced plans to add another 4,500 square feet to the store.

Among the experienced staff who are equipped to set up a child for a first outdoor experience, teach a fly casting lesson in the parking lot, test out the sights on a bow or even guide clients on a fishing trip. Stop in any time and the store is buzzing with activity, yet no one seems to feel rushed, or even anxious about their inexperience. It’s all about connecting people to the wild that awaits, Binkley says.

“We’re losing some of that history and heritage and connection to the land, and it’s important for parents and children to be able to do that together, to pass down that conservation ethic … it’s one small way I can help to preserve that,” he explains. “My dad passed away in October, and I remember him driving me around as a kid to these kinds of stores that just didn’t exist anymore. We met some of the greatest people in those stores back then, shared meals with them and became part of a community.

“The best times I have now are with my girls in the woods or on the water, and it was just something I wanted to do for other people and their kids. My wife Christie has become a hunter too, and we have talked about the fact that if God forbid something happens to me, she has the ability to go out and harvest food and provide for our family. That’s important to us.”

The location of Bink’s Lodge was strategic, he says—not only the traffic count on Columbia Avenue, but a huge parking lot that can easily accommodate a trailered boat, or a test drive of an electric all-terrain vehicle for sale in the store. They recently held a launch event for a commemorative Johnny Cash edition Abel fly fishing reel. Abel, one of the most sought-after reels available, only made 250 of these, and they chose to celebrate the roll out in Franklin. John Carter, Cash’s son, attended the event, and told stories of what his time spent fishing had meant to him and his father, both needing the escape.

“When you step back from all of the hustle and bustle, these are the things that really matter,” Binkley says. “If Ray and I and the staff here can help make that connection, then we’ve accomplished what we set out to do.”

Located at 1715 Columbia Avenue, Bink’s Lodge is open from 10 a.m. to 7 p.m., Monday through Saturday. Be sure to follow them on Instagram, @binkslodge.

The new concept in the Bink’s Outfitters brand celebrated the grand opening of the Columbia Avenue location. This store showcases high-end hun…