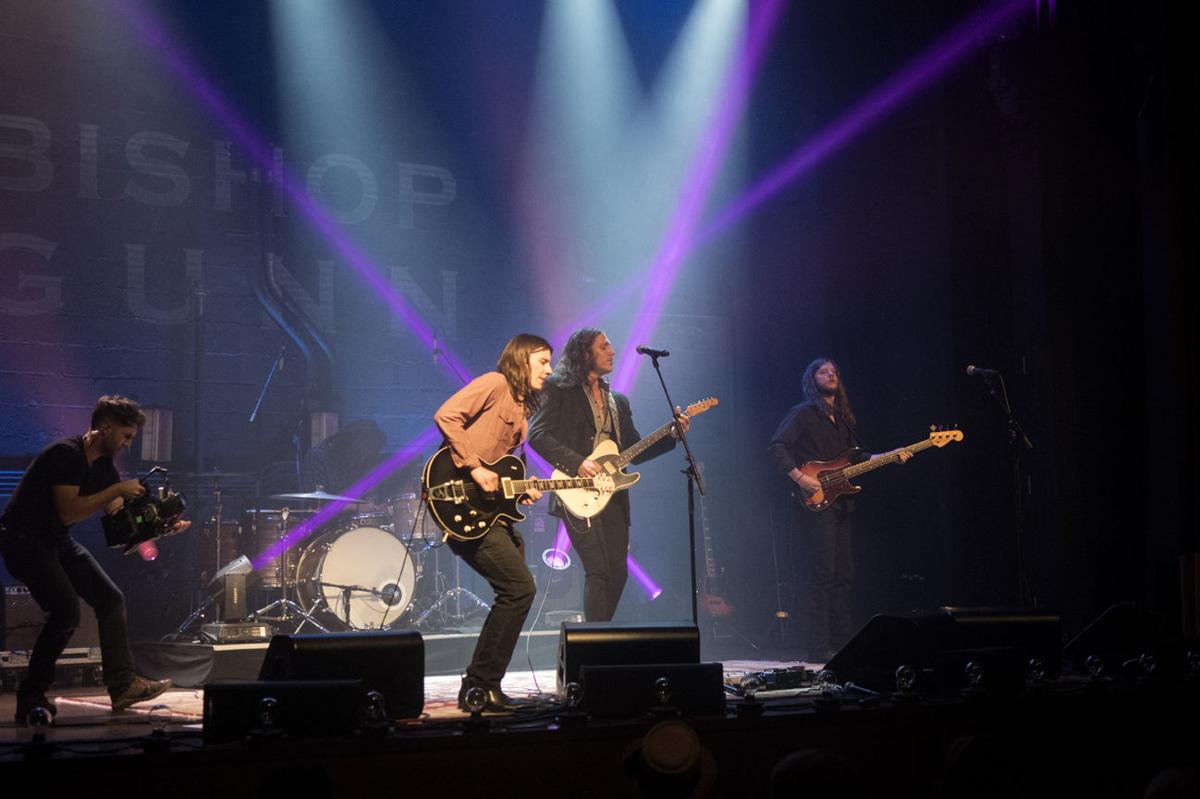 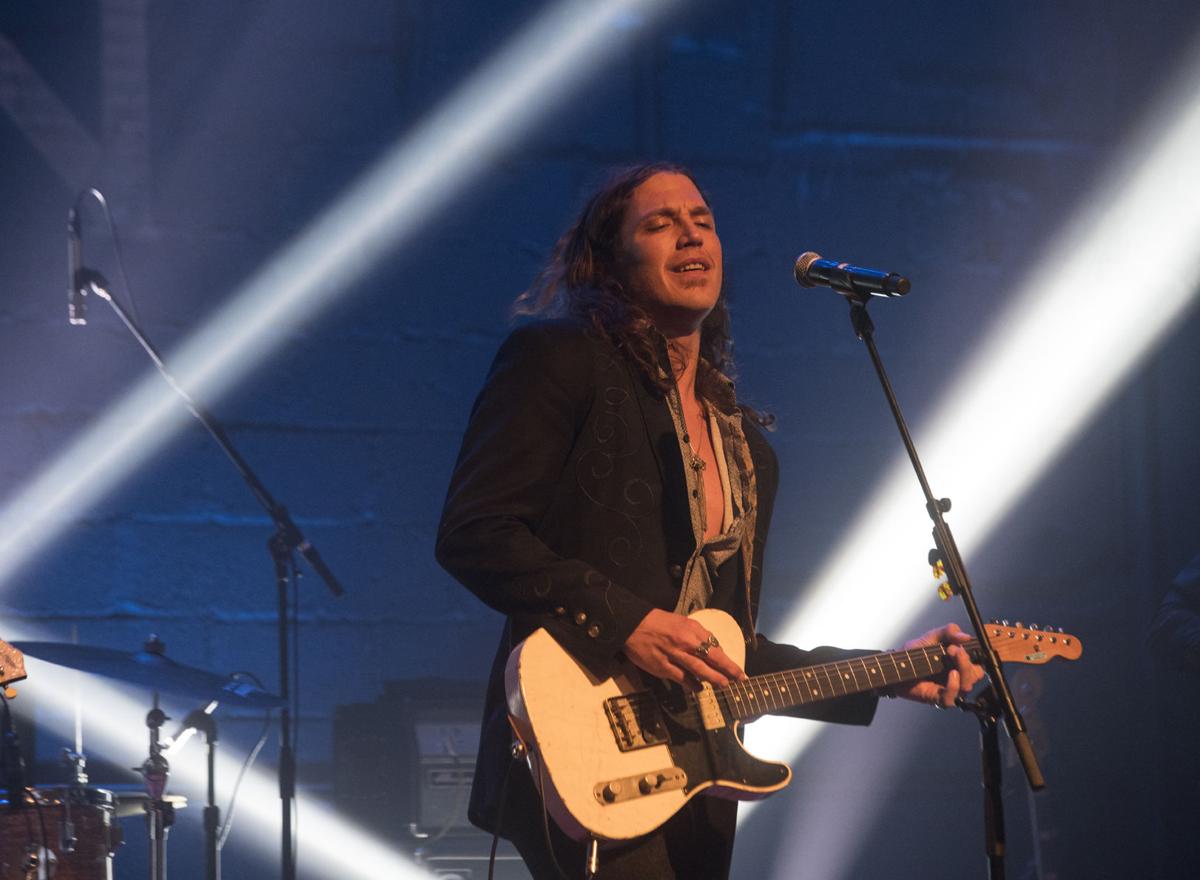 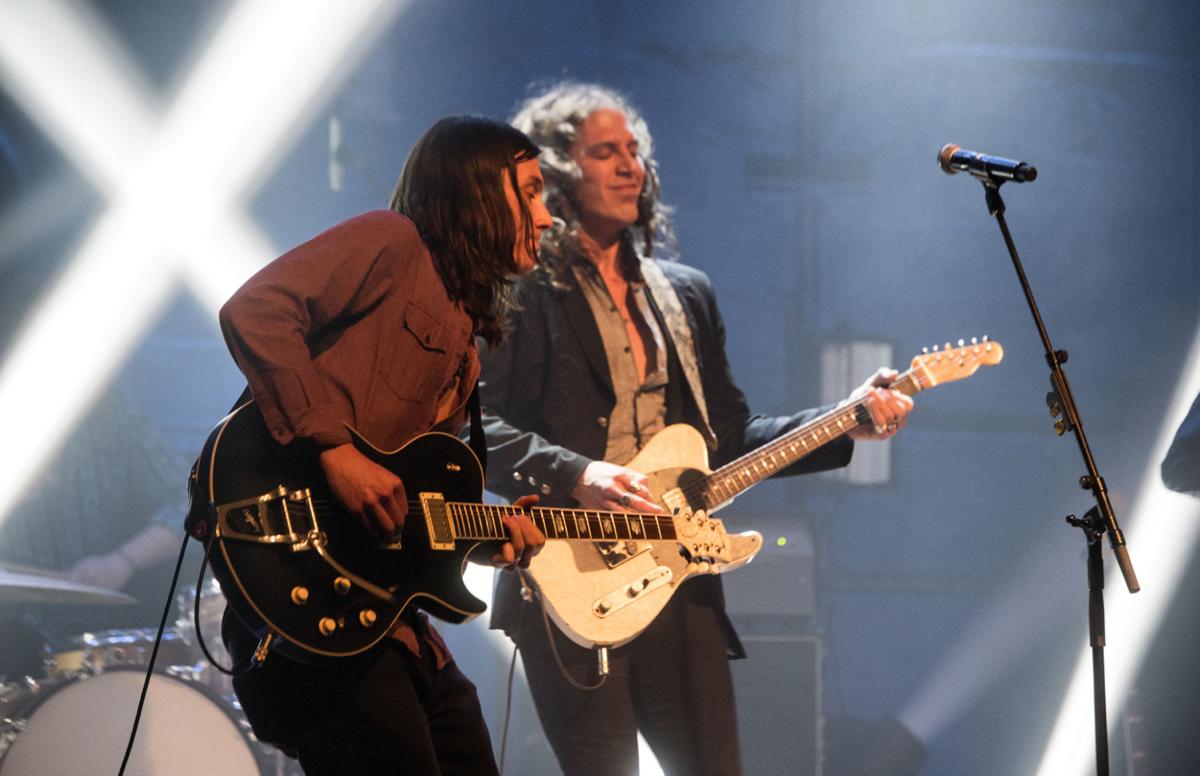 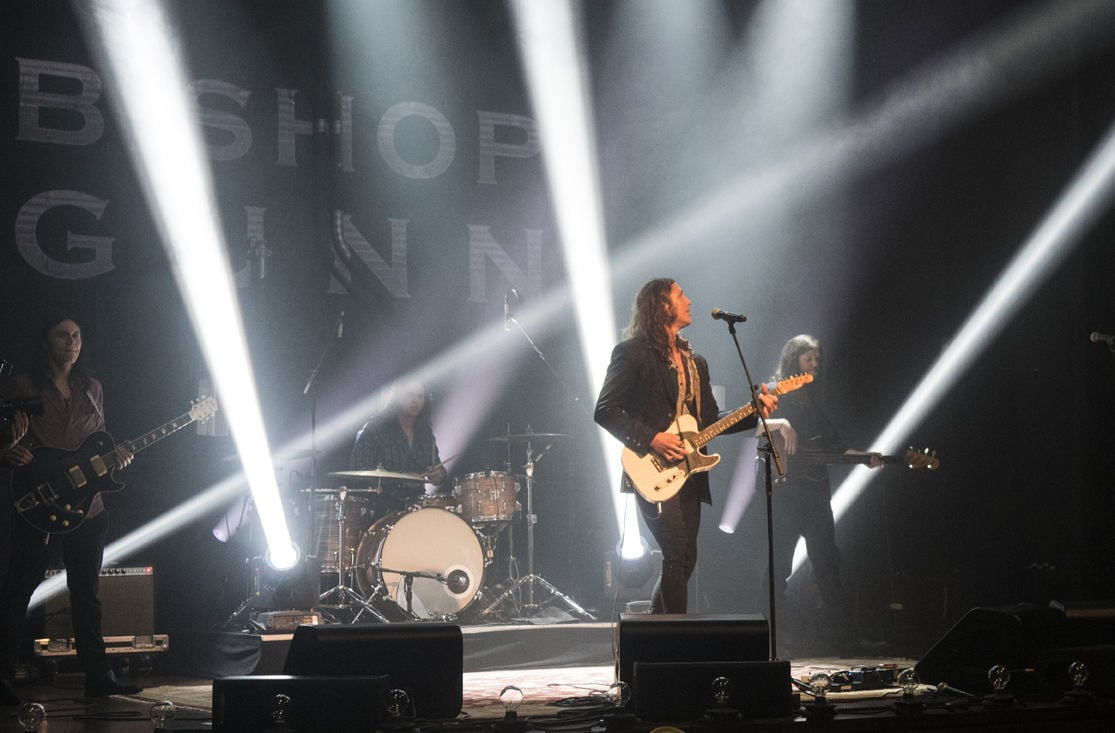 The Franklin Theatre was sold out for the highly anticipated Bishop Gunn release party for their debut album Natchez. A few hours before showtime the band members lounge in the upstairs green room with permanent smiles on their faces.

“It’s amazing to see how far we’ve come in just two years,” says lead singer Travis McCready. “Playing the Franklin Theatre is really a milestone for us. This is a perfect launch pad. Franklin is like a new hometown for us and everyone has supported us since we got here.”

Two years ago, the southern rock band moved from Natchez, Mississippi to a farmhouse in Leiper’s Fork, where they have remained embedded …  writing songs, playing local gigs and networking.

“We moved to a house in the middle of nowhere,” says drummer Burne Sharp. “We don’t have internet, we barely have cell reception and we don’t have a TV, so we built a studio and entertained ourselves by playing and writing music.”

McCready was following in his father’s footsteps, working in the steel industry in Natchez when he realized it was time to take the leap and pursue music full time.

“I brought my bucket of tools in and told the guy I was working with that I was done. He laughed and said, ‘You’ll be back,’ but soon after that I met Burne and we started playing music together,” McCready says.

After both having played music in various incarnations, McCready and Sharpe connected at a big annual festival in Natchez. A friendship and collaboration formed, rooted in the history and sounds of their home and the surrounding Delta.

The band came up with the name Bishop Gunn, having seen it on a headstone of a grave in Natchez.

Bishop Gunn recorded four songs for their debut album Natchez at Muscle Shoals Sound Studio (MSSS) with producer Mark Neill (The Black Keys), including the lead single, “Shine” which marks the first release of material tracked inside the legendary MSSS since it reopened in January 2016.

“Travis is the one who has the initial idea of a song and we all build off that,” Smithers says.

“I was sitting on the porch on the farmhouse writing this song and Nashville just seemed like one big house to me … kind of like shine that light on me and I’ll sit and tell you my stories …” McCready says.

“We actually got a phone call to be the first band to record in the newly reopened Sound,” Burne says. “It was such a surreal experience and ended up being life changing.”

The album will also feature a song tracked at Muscle Shoals’ FAME Studios located down the road from MSSS.

While they were heading to FAME, they got a call that legendary producer at FAME Rick Hall had died.

“We nearly turned around, but we talked to his son and people at the studio and decided that this is what he would want, for the studio to continue even on the day that he passed away,” Lewis says.

Ironically the hook line of the song is “I hope I won’t die in Alabama,” which McCready says was eerie, but they cut it and it became one of their favorite songs on the album.

“It was a real natural fit working with Casey at The Purple House,” Burne says. “He’s such a talented dude.”

The end result, Natchez, is eleven songs that have a smoky, southern rock with bluesy undertones. It feels like a mixture of geographical destinations on the Trace from Franklin to Leiper's Fork, Muscle Shoals and Natchez.

“The record is a total representation of where we’re from, the culture we grew up in and really the things we grew up seeing every day,” Burne says.

“The biggest hope for the future for us is to preserve music from Mississippi in its somewhat primitive form of blues, rock and roll with country aspects,” McCready says.

They are on the right track, and Bishop Gunn seems poised to take on the world.

In 2017, the band appeared on Kid Rock’s 8th Annual “Chillin’ the Most Cruise” and was voted the best band on the boat by the “chillers.”

The group went on to do commercial film for Southern Comfort in Clarksdale, Mississippi and spent their summer touring. In September, Bishop Gunn took the stage at the Pilgrimage Festival and also appeared in a commercial for Justin Timberlake’s clothing line.

Earlier this year the band was featured at SXSW, played support dates for Blackberry Smoke and was invited for a return appearance on Kid Rock’s 9th Cruise.

Tomorrow they head out on the road to headline their own music and crawfish festival in Natchez and soon thereafter will be touring in support of the album this summer, including performances at The Peach Fest, The Big House Museum, support dates for Lynyrd Skynyrd and The Outlaws and many others.

“This has all been so overwhelming, but we are all truly grateful,” Burne says. “We know it’s taken our friends, family and fans who have gotten us this far and we don’t plan on forgetting that.”

Will Jordan is a Franklin native and the owner of Kimbro’s Pickin’ Parlor, a music venue and restaurant in downtown Franklin. He also owns Carpe Diem, located directly next door which offers professional photography session bookings, eclectic vendors and the largest selection of vinyl in Williamson County.