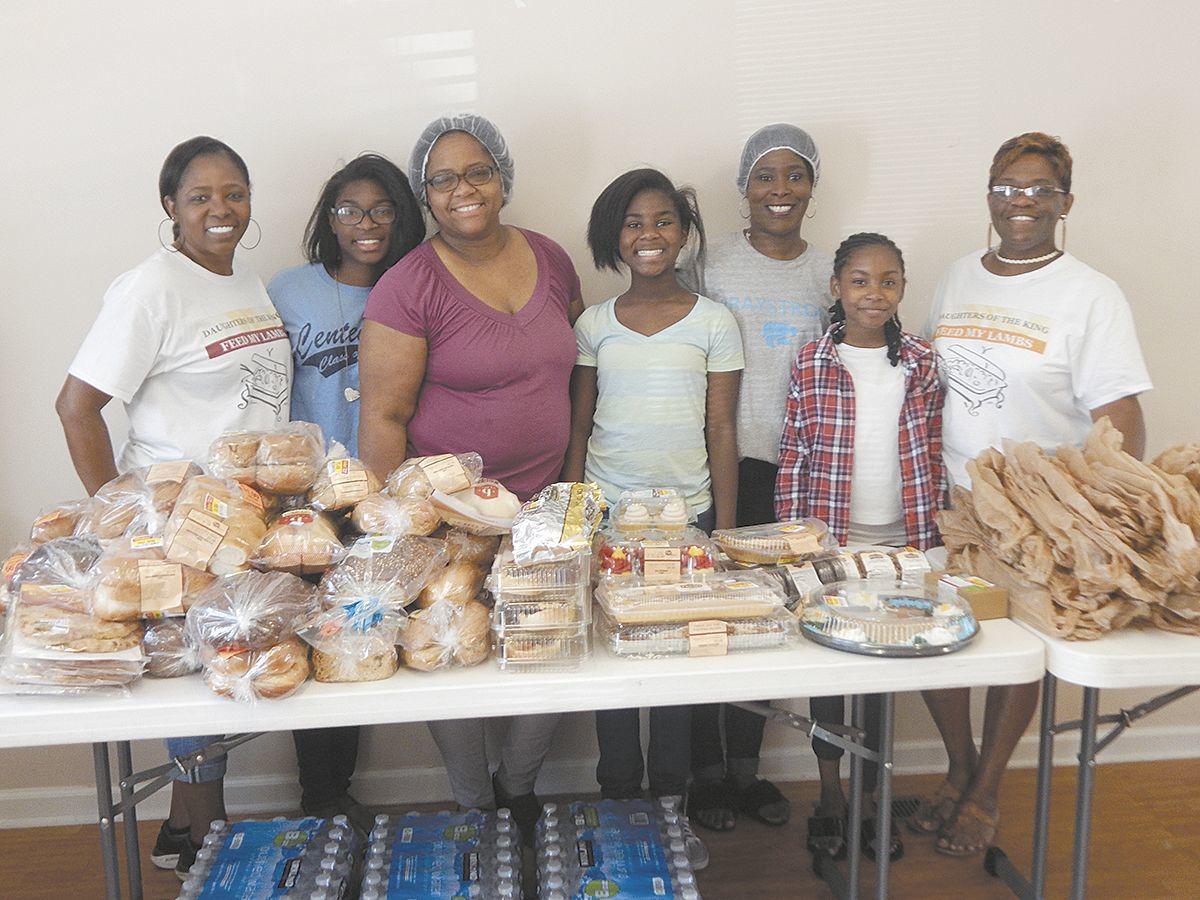 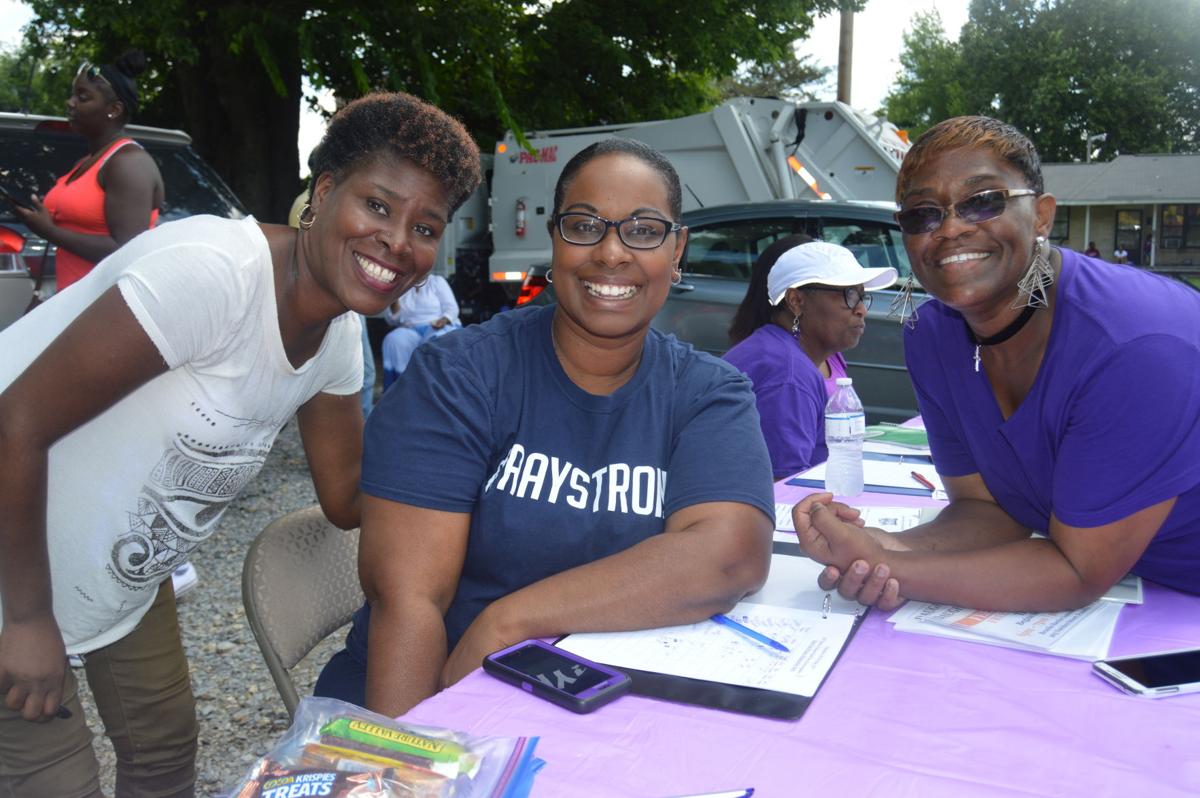 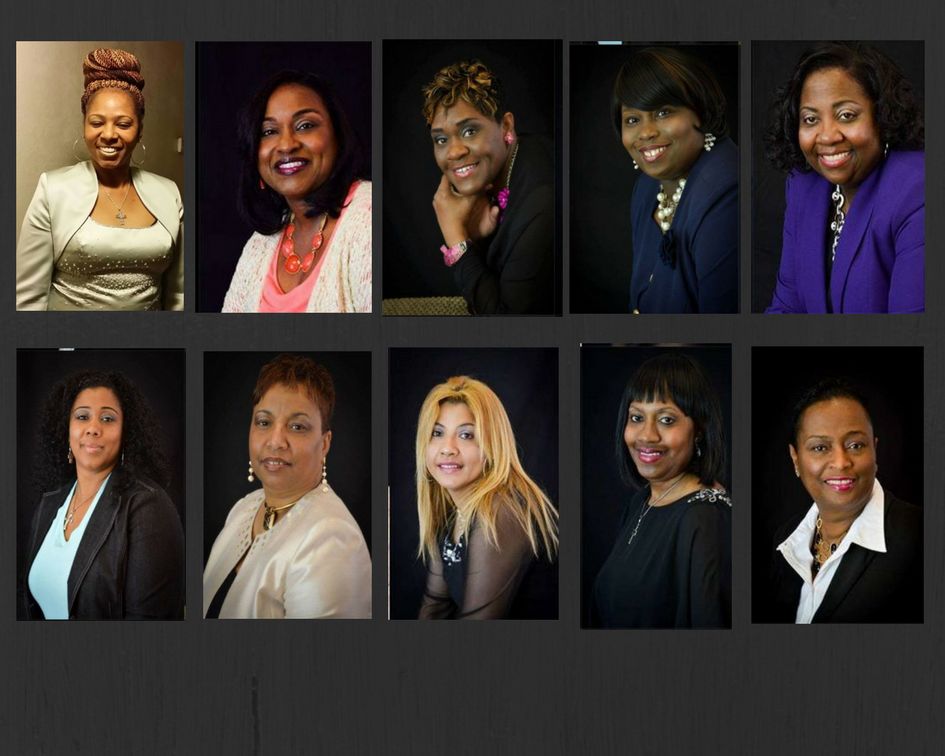 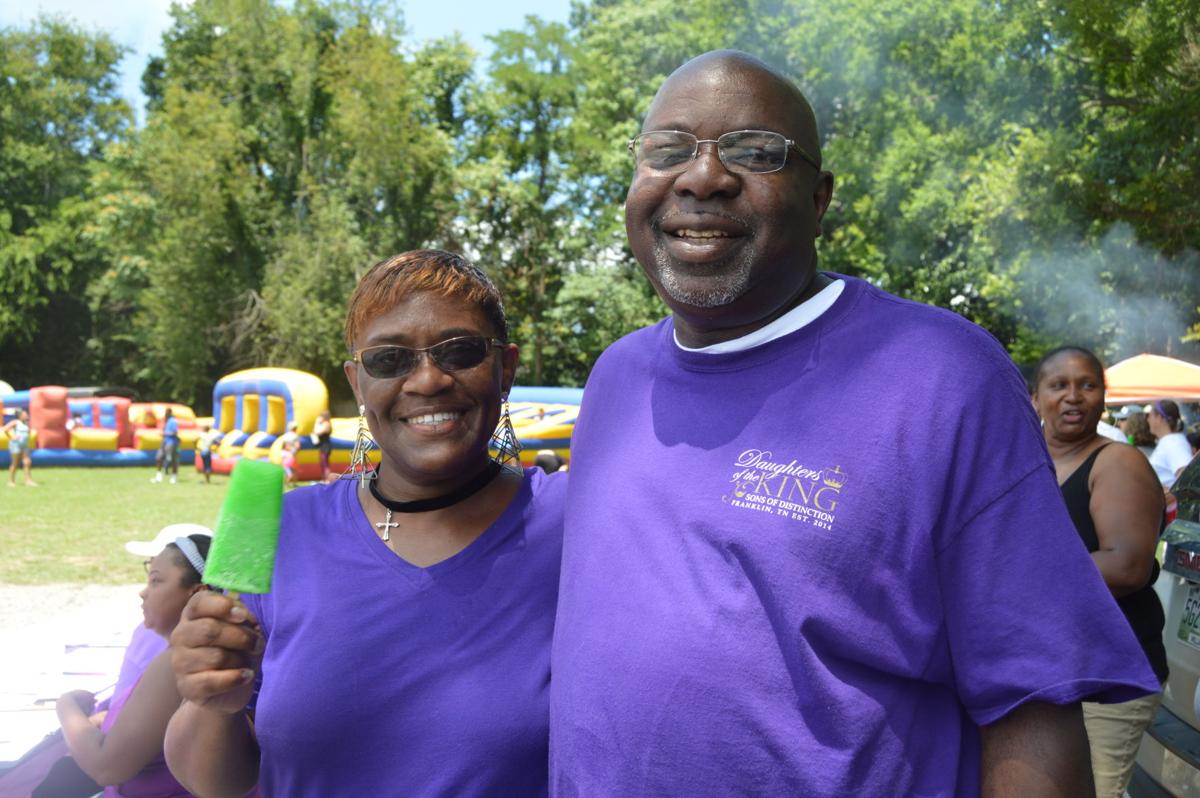 Tracye Tucker and her husband 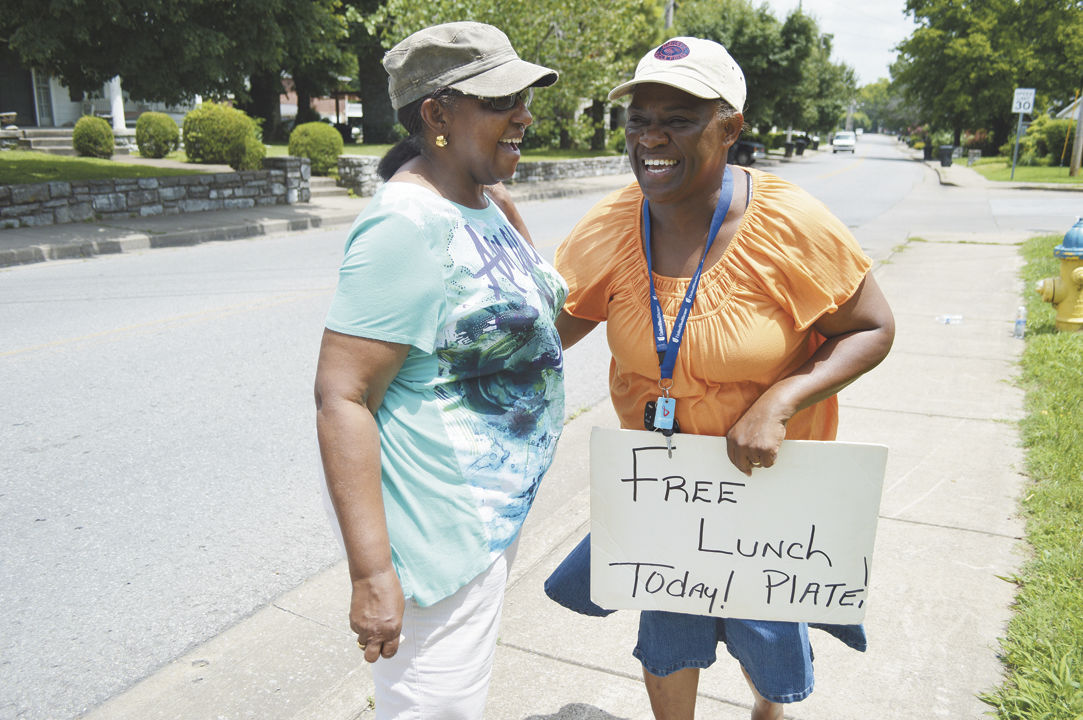 Tracye Tucker (right) chats with volunteer Laverne Holland on a sidewalk on Natchez Street in Franklin, while holding a sign to alert passersby of the free lunch ministry Feed My Lambs offered by daughters of the King. 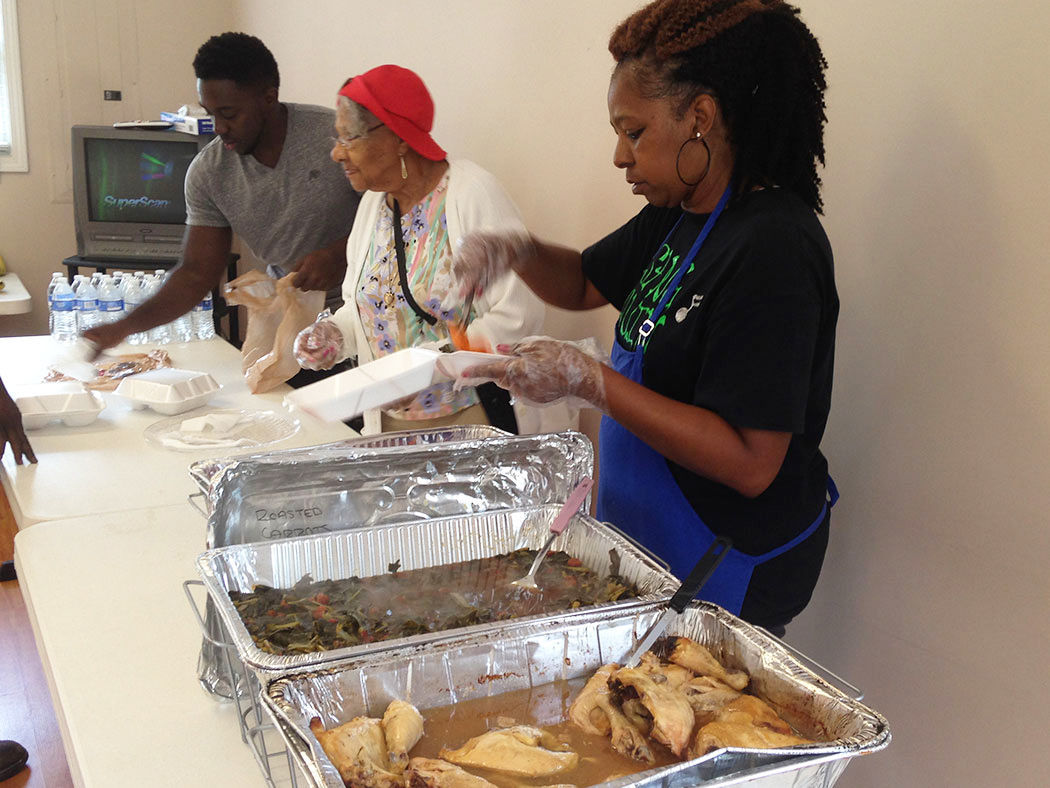 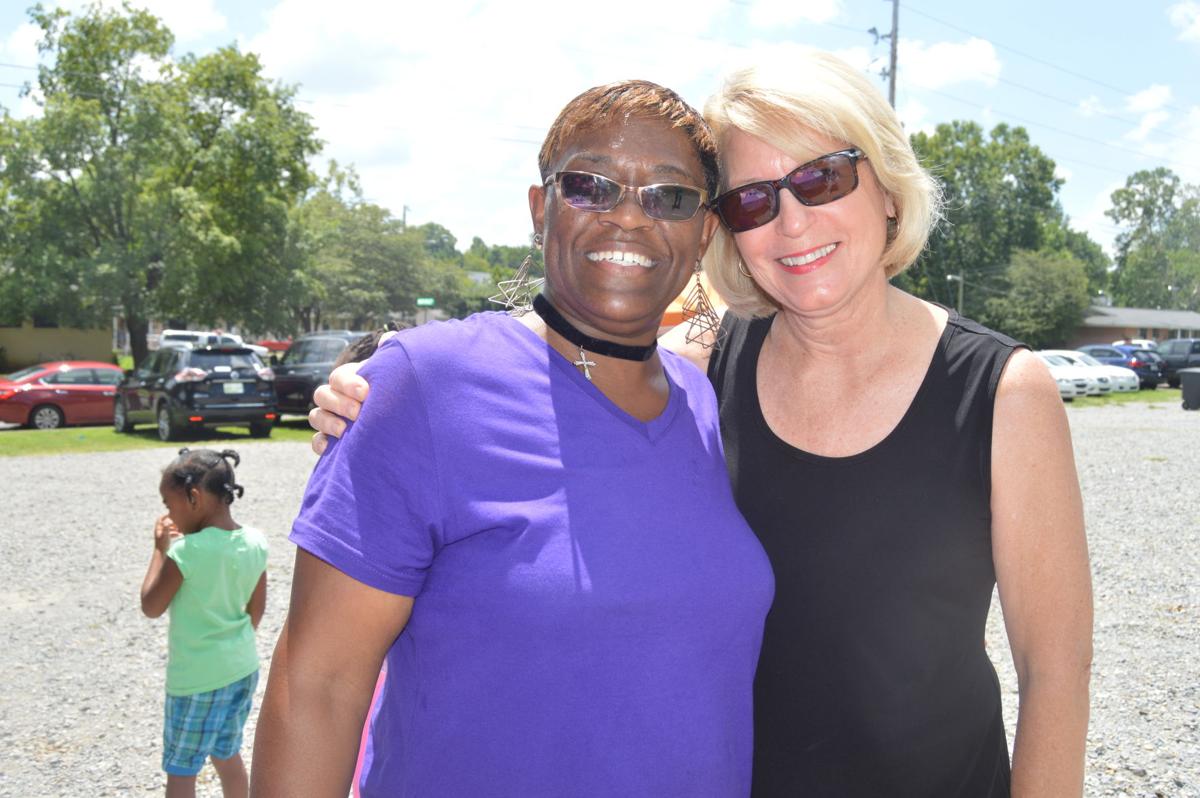 Tracye Tucker and her husband

Tracye Tucker (right) chats with volunteer Laverne Holland on a sidewalk on Natchez Street in Franklin, while holding a sign to alert passersby of the free lunch ministry Feed My Lambs offered by daughters of the King.

About six years ago, many met long-time city resident Tracye Tucker for the first time as she was waving happily to pedestrians and drivers along Natchez Street in Franklin, while holding a homemade cardboard sign that read, “Free Lunch,” written in black marker.

Tucker likes to keep it simple.

She didn’t need a big marketing campaign to get the word out about the summer Feed My Lambs program, which serves, well … anybody.

The small cardboard sign was enough to let surrounding neighbors know a hot meal was being offered, and since, the program has spread by word-of-mouth to serve thousands over the past six years.

As part of the Feed My Lambs program provided by Daughters of the King nonprofit founded by Tucker in 2014, those who want it, are given a hot meal, “no strings attached, no conditions.” And Tucker doesn’t ask questions.

When the program began, the 10 caring women who make up Daughters of the King served almost 100 people a day at the Shorter Chapel Bazelia S. Harris Community Life Center.  The program has grown to serve 300 people a day, three days a week during June and July. Daughters of the King also offer a winter feeding program one night a week, and they deliver to the elderly, sick and disabled.

Some might be surprised that hunger exists in Franklin, but Tucker says hard times can reach anyone.

She sees it everyday.

In fact, the Feed My Lambs program is expanding to open another feeding site at Hard Bargain Association’s Ty’s House community center this summer.

“I think the need is here,” Tucker said. “There are unspoken situations people find themselves in. There are a lot of people out there who work but struggle to make ends meet. Their income doesn’t meet the standard of living in Franklin.”

According to GraceWorks’ 2017 annual report, 11,400 people live in poverty in the Williamson County area; 2,400 children in need were given backpacks full of school supplies in 2017 and 7,000+ food-insecure neighbors were served in Williamson County by GraceWorks.

By December 2017, DOTK served 4,000 members of the community through its feeding programs combined, during the summer, fall and winter.

“It’s expensive to live in Franklin,” Tucker said. “People work, but after you pay rent or a mortgage, there’s nothing left. There are also people who have lived here a long time, and they can’t keep up with the standard of living.”

The price of housing has continued to skyrocket in Franklin, where the median income as of April 2018 reached $523,570.

When Tucker and the 10 other ladies formed Daughters of the King nonprofit, they did so with the heart to give to those who need just a bit of extra help.

Tucker said the women knew there were hungry people in the community, and they just wanted to provide a safety net, a safe place where people could go to get what they need – sustenance.

“We are combating hunger,” Tucker said. “We are not targeting a specific group or ethnic group but a problem – and that’s hunger in our community and that can be black, white, young, old.”

No paperwork, eligibility or criteria is required. “Sometimes you make too much and are just a little over, and it’s easy to fall through the cracks,” Tucker explained. “But the need is still there.”

When asked why it’s important to keep it simple, Tucker said it’s because that’s how she was taught through her faith.

“Because that’s the way God wants it. He hasn’t told us anything different. A free plate is just like salvation. If you want it, all you have to do is ask. And it is provided.”

However, Tucker said she understands it’s hard to ask. Sometimes pride gets in the way.

“It’s enough that someone just walked through the door. Sometimes you don’t know how much it takes for someone to walk through that door,” she said.

DOTK also throws a Back-to-School Bash each year, giving away school supplies, toiletries, free haircuts and prizes, all while enjoying food and games on Natchez Street. Another big event, focusing on empowering girls, is the annual Miss D.O.T.K. Pageant to be held on June 16 at 3 p.m. at Johnson Elementary. LaToya Swift Miller, pageant coordinator, said the pageant aligns with the mission of DOTK.

DOTK started serving others through the feeding programs but have expanded to serve young girls through helping them develop a healthy self image.

The purpose of the upcoming DOTK pageant is to “destroy low self esteem and self image in girls and young women,” Miller said.

DOTK’s mission is “to serve with the commitment to encourage the transformation of mind, body and soul through effort-driven initiatives to demonstrate the love of Christ.”

The Feed My Lambs program offers a free home-cooked meal June 5 through July 19 on Tuesdays, Wednesdays and Thursdays from 11 a.m. to 1 p.m. at the Shorter Chapel community center located at 263 Natchez Street to anyone who wants to participate. The Miss D.O.T.K. Pageant will be held June 16 at 3 p.m. at Johnson Elementary. Admission is $5 in advance and $7 at the door. Pageant participants can rent a dress for $25 for five days through the DOTK Closet of Love program. The Closet of Love also serves other special occasions such as proms, homecoming and other events. Email questions about the pageant to dotkpageant@gmail.com.

Kerri Bartlett is the managing editor of the Williamson Herald newspaper and writer in the area who enjoys driving the scenic back roads of Williamson County.