You have permission to edit this article.
Edit
Home
Current Issue
Events
Past Issues
Advertising
Subscriptions
Williamson Herald
1 of 8 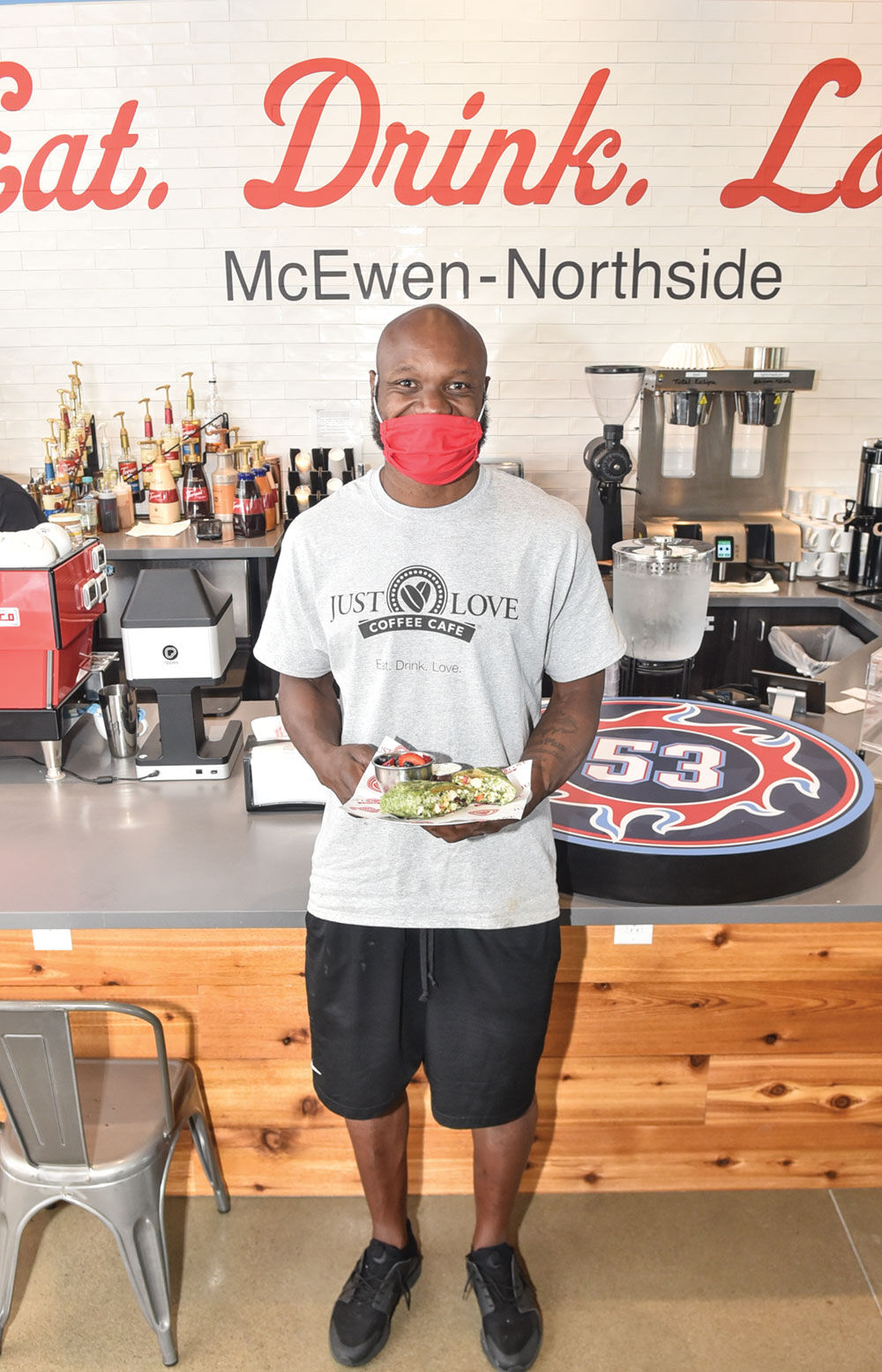 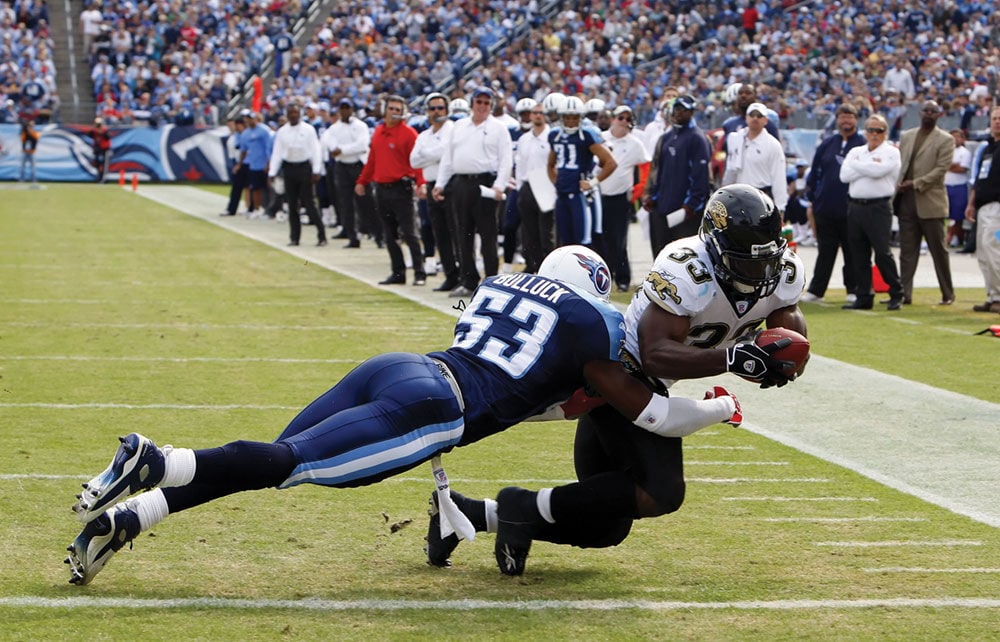 Keith Bulluck, former #53 for the Tennessee Titans was a defensive leader on and off the field. 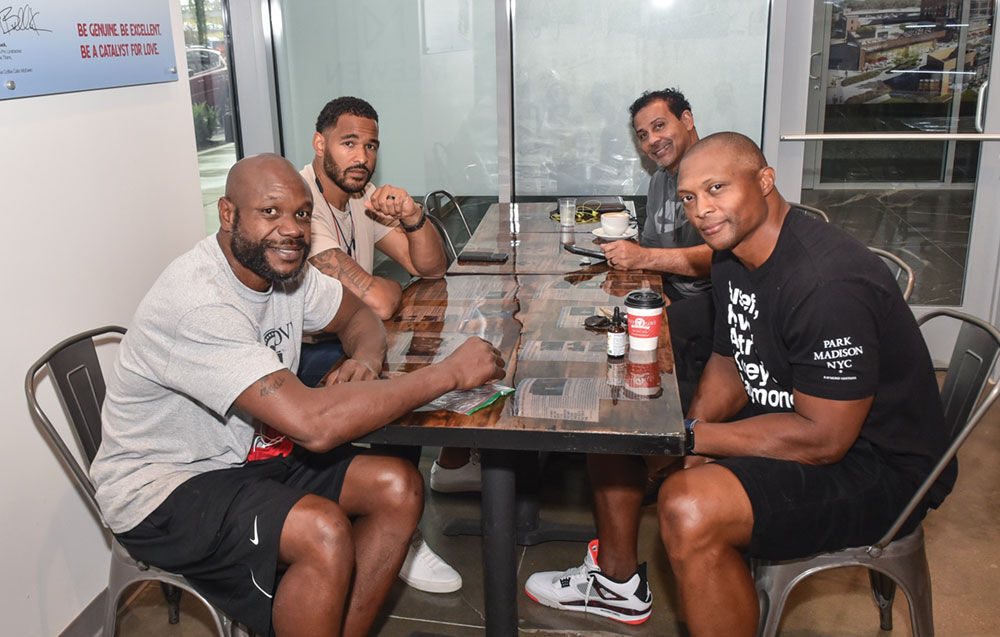 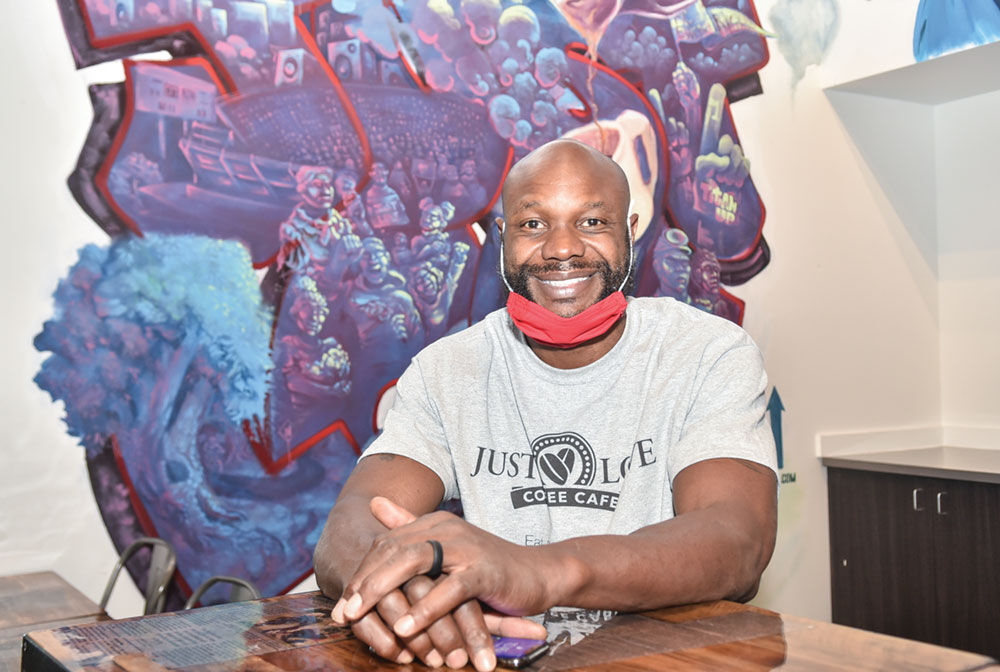 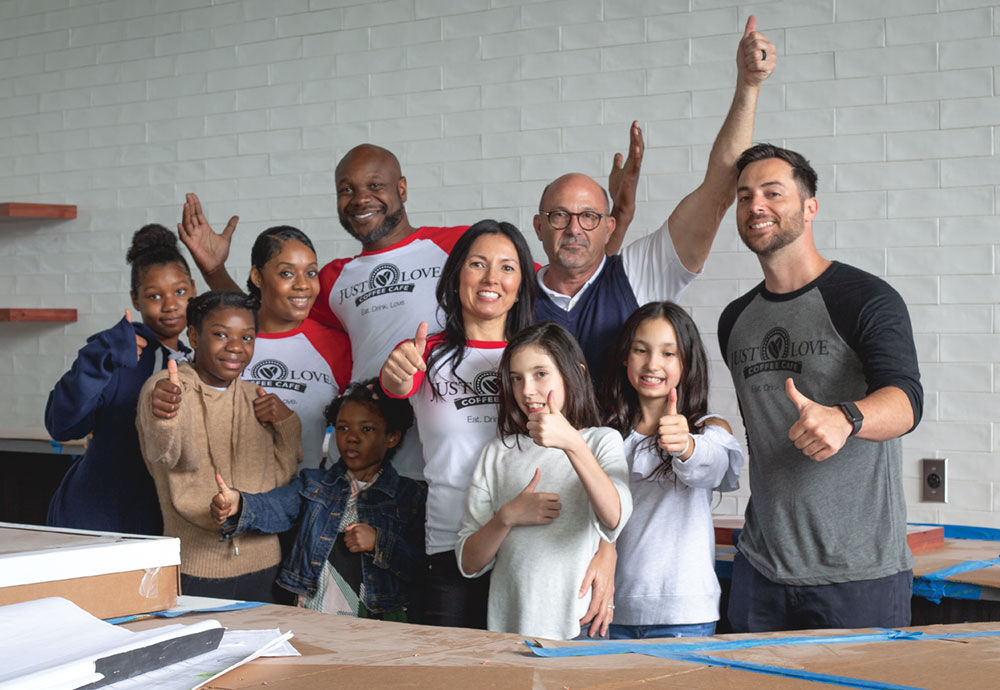 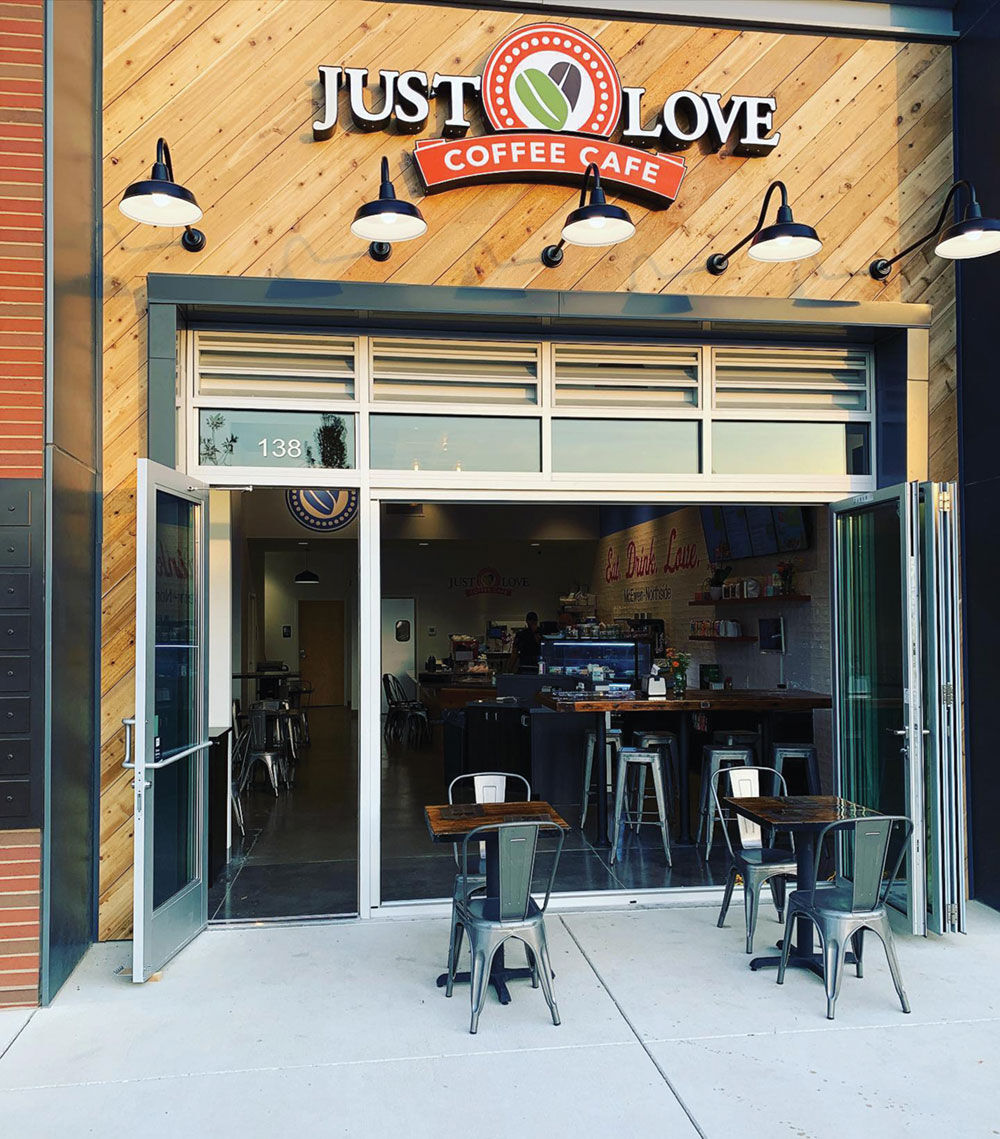 Outside seating is available at Just Love Coffee in the new McEwen Northside development in Cool Springs. 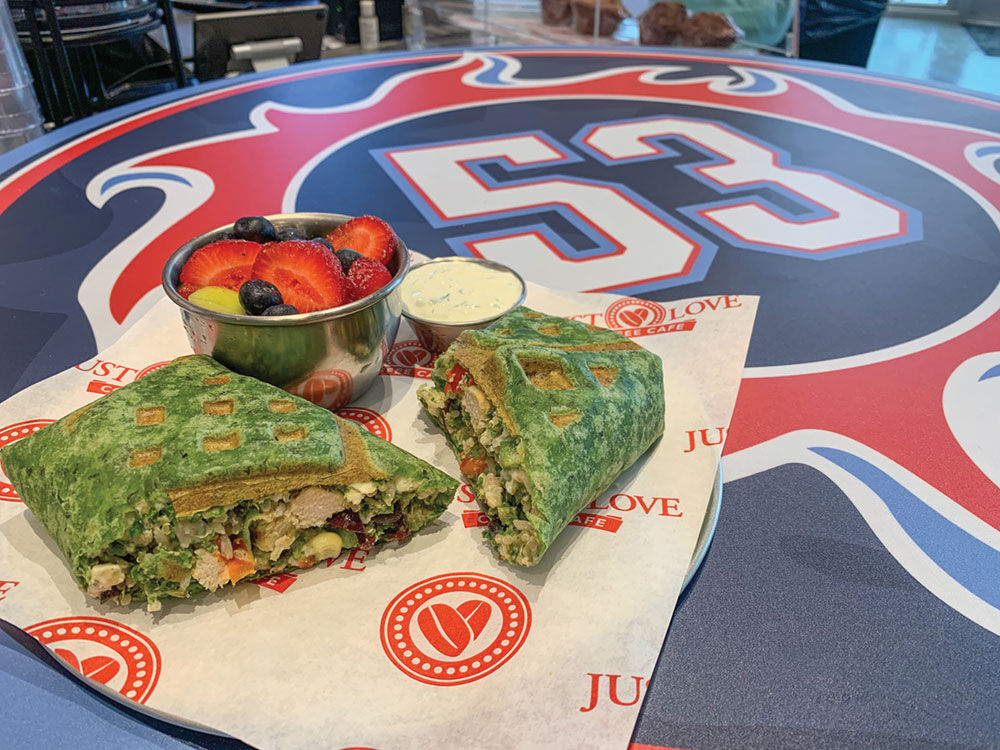 Bulluck created his own delicious chicken Mediterranean wrap, kale salad and a breakfast burrito for his menu.

Keith Bulluck, former #53 for the Tennessee Titans was a defensive leader on and off the field.

Outside seating is available at Just Love Coffee in the new McEwen Northside development in Cool Springs.

Bulluck created his own delicious chicken Mediterranean wrap, kale salad and a breakfast burrito for his menu.

Keith Bulluck has been putting in the hours lately. Opening a business in the middle of a global pandemic can be a struggle, he says, but this one has a broader message that sits close to his heart, so he’s willing to pour his laser-focused approach into it more than ever.

Bulluck, who grew up in foster care before playing 11 seasons in the NFL, is the newest Just Love Coffee franchise owner. His location opened earlier this year at McEwen Northside in Franklin.

The former Tennessee Titan says owning and working at the local brand is a tool he’s using to help reconnect with the community while pushing a positive message about supporting children in need, specifically those dealing with foster care and adoption.

“For me, this is about educating adults and young adults about foster care and adoption,” says Bulluck, who was taken in at age 12 by single mother Linda Welch. “People can come in and they can read my story or maybe the founder Rob (Webb’s) story and know that at least a portion of the purchases here go to adoption and foster care programs.

“I’ll always be front line for those programs, and this kind of takes me back a little bit.”

In an effort to help children with similar backgrounds, Bulluck started the Keith Bulluck Believe and Achieve Foundation in 2003 — during his third season with the Titans — to work with foster care groups in Middle Tennessee and New York. He also served as a national spokesperson for Foster Care Awareness Month and was a two-time Titans’ Walter Payton Community Man of the Year Award winner.

Bulluck, who has played more of a silent partner in several other investment opportunities over the years, met Just Love founder Rob Webb last year and the process of owning a local shop began.

Webb and his wife Emily first launched the idea of the Just Love brand around the time the two decided to adopt and grow their family. They adopted two children — Tigist and Amelie — from Ethiopia in 2009 and Rob has said he had a “lightbulb moment” during the process about trying to set up a hand-roasting business as a for-profit venture to help others — a form of social partnership, he described.

In 2011, Webb opened his first coffee shop and was already able to donate thousands of dollars to charity. Just Love began implementing a food menu in 2014 and the brand continued to grow. It’s now featured in nine states, and Bulluck’s newest location brings a third franchise to Williamson County and ninth to the state.

Bulluck said he felt a quick connection chatting with Rob Webb and that drove them into business with ease, especially since the pair both embrace the company's core values: Be Excellent. Be Genuine. Be a Catalyst of Love.

“He’s genuine and whole-hearted and you just know he really loves his kids,” Bulluck says of Webb. “It was a no-brainer to do business with someone like that in terms of actually following through and launching this idea and being here and being a part of this community again.”

Heather, who married Keith in March of 2013, says her husband was able to relate to the Webbs in how they adopted and how they help others.

“Keith came from a similar situation, so seeing their journey and his journey, there’s just not many people who honestly can relate to such an under-recognized aspect in adopting and fostering children,” she says. “That really hit Keith heavy with Rob. Rob is an amazing dad who learned and tried to walk in his kid’s shoes, and for Keith to see that, it hit him right in the heart, and me as well.”

Stirring up something special

Bulluck is taking the same consistently hard-working approach he had on the field into his new 1,800-square-foot shop. He’s up by 5:30 a.m. and usually at work by 6 a.m. The days often have stretched to as late as 10 p.m. It’s the kind of hours the former Titan put in on the gridiron as one of the greatest defensive players in franchise history.

“It’s something we’re kind of used to, I guess you can say,” Heather says of the long hours. “It’s kind of like football hours, so it’s like being at camp.”

Bulluck is the face — a masked one thanks to the COVID-19 pandemic — behind the shop. Newspaper clippings are embedded in the tabletops with pictures, and a giant mural featuring him and former teammate Steve McNair is highlighted as well. Bulluck, who was a staple for the Titans defense from 2000-09 and recorded eight straight seasons with 100 or more tackles, has even implemented some of his own flavor in the menu.

He’s used some of his knowledge from being a professional athlete to help create a delicious chicken Mediterranean wrap, kale salad and even a breakfast burrito, he says. Just Love is known for its ability to utilize a waffle iron and that is still featured at Bulluck’s location with womletes — that's waffle-iron made omelets — sandwiches and wraps as well as a variety of soups and salads, plus plenty of sweet treats.

There are all your favorite coffee choices as well with several signature blends. Heather is quick to note that her husband is actually more of “tea kind of guy,” but his love for coffee is growing.

“I know he loves trying the different blends and roasts a lot more now,” she says. “To be honest, I would have never put him in a coffee shop, but it’s turned into an amazing fit.

“He’s just so dedicated and wants to make this the best it can be.”

Bulluck was drafted by the Titans in the first round with the 30th pick in 2000 out of Syracuse, where he earned a bachelor’s degree in psychology. Shortly after retiring more than a decade later, Bulluck gained his Master’s of Business Administration from George Washington University. He’s used his business background to invest in many different endeavors and this could be the start of more locally, he says.

“I’ve always been business-minded; even when I played, I tried to expand further than just being an athlete taking classes at Harvard and Stanford,” he says. “I want to provide a place for people in the community to come and maybe get some work done, enjoy some coffee and high-quality food, and I hope you can come here and leave with a smile on.”